This page will be dynamic with new info added periodically.

An 8m Groups.io forum is here.

A few people have emailed to ask about the process of obtaining a license to transmit on frequencies outside of the amateur bands. Let's get straight to it - but first, a word of caution:

The third harmonic of 40.660 MHz is 121.98 MHz. This is in the commercial aviation band. For obvious reasons of public safety, the FAA does not look kindly upon QRM, intentional or otherwise, and they work closely with the FCC to go after any sources of QRM related to air traffic safety. How do I know?

One point to remember: 121.98 MHz is in the aviation band of other countries as well, including those that grant 8m approval for all of their appropriately licensed amateurs. I've not heard of any QRM issues associated with this band's use in those countries.

How to apply for a temporary experimental FCC license

You'll need two things: an FRN (FCC Registration Number) to log in to the relevant FCC website and $125. This is the fee to apply, with no approval guaranteed (think of it as $5 a month).

If you don't have an FRN (or don't remember it or the associated password), links on the log-in page will allow you to take care of that: 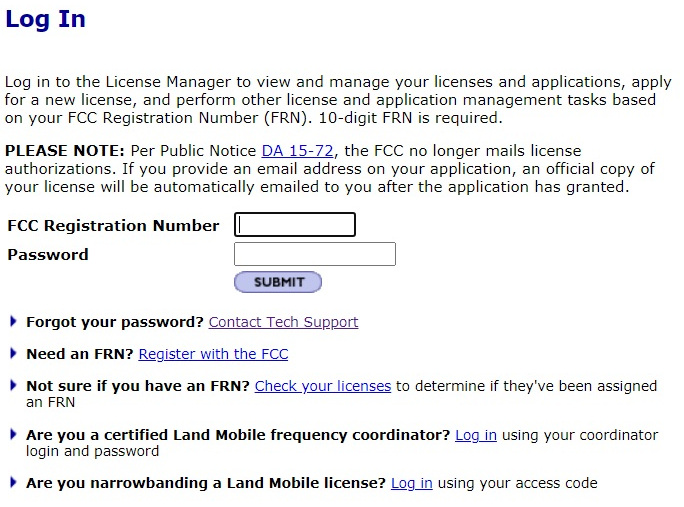 After logging in, you'll need to go to this website to fill out form FCC-442. This is the actual application for an experimental license.

Under 'Application Purpose' click the first option. This will take you to a questionnaire where you'll be asked the following questions (and more): 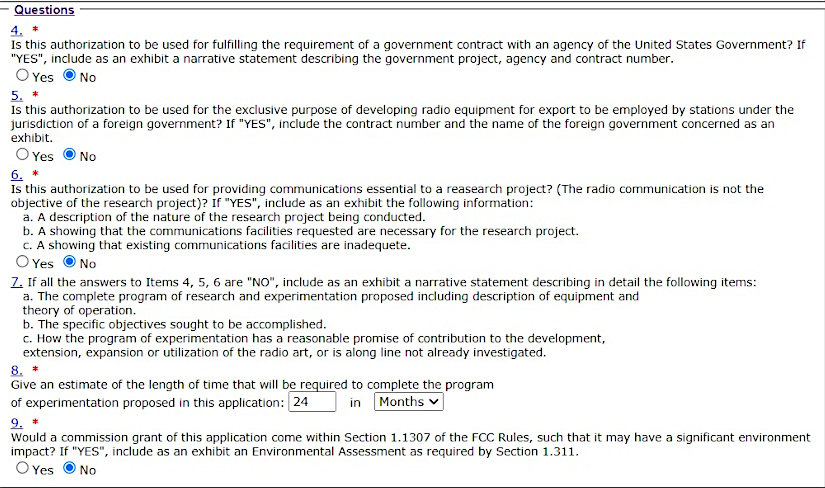 Complete the questions and continue through the sequence. You'll be asked what power you intend to use and what frequencies. This is a sort of balancing act - ask for too much and the risk of being denied is higher. How much is too much? I don't know. I asked for 40 kHz and 100 watts for 24 months and received my approval and callsign exactly 30 days later.

Notice Item 7, above. Here's what I wrote:

Purpose of request/license application is to perform propagation experiments on a frequency between the 6- and 10-meter amateur bands.

Several countries allow amateur operation on the requested frequency. Transmissions at AE5X and would make use of commercial equipment currently in use on the 6- and 10-meter bands.

One or two  pages later, you'll get to the part where you break out your VISA card. After paying, you'll receive an emailed receipt containing a confirmation number, a file number, a remittance ID, a treasury tracking ID and your FRN.

After three weeks, I went to the website shown below to check on the status of my application. No record of it existed.

Worried that I'd done something wrong, I called the FCC's Help number and was told that the application had been sent to the National Telecommunications and Information Administration (I'd never heard of them) and that the only way to check the status was by emailing them.

To my surprise, I received a reply the next morning that my application was pending. A week later, I had the approval/callsign.

Here is the FCC's own guide to filling out Form 442. I didn't find it until after I'd gone through the process ;-)

Here's a suggestion to consider: It's easier to ask for more later, than for a lot now. In other words, you may want 100 kHz of spectrum and authorization for 200 watts. If so, apply for that later, as a modification to your existing license rather than as the initial request. That way, if it's denied, you still at least have your 40 kHz and 100 watts (or whatever was approved in your case) to fall back on.

I think the area around 40.6 MHz will be very interesting in the next two years, regardless of whether the solar cycle is "all that" or a lackluster replica of the past few years.

Both 6 and 10 meters have their own distinct characteristics. What will 8 meters be like? I hope to see you there.

QRP Labs' Ultimate 3S will operate on 40 MHz. They even sell low-pass filters, though some part values will need to be changed to make an 8m filter. Also useful for this set-up would be their 10W linear amplifier (good for about 5 watts out on 40 MHz). All three items are sold as kits.

My own write-up on the 10W amp kit can be found here. It's not a beginner's kit.

One person asked about the QCX+, also from QRP Labs. Hans states:

"The transceiver should work on 10, 12 and 15m bands and kit versions for these bands may be made available in future, once we have had time to test operation and performance on these bands."

The Transverter Store sells both a kit and an already-built 8m transverter. Details are here.

Many HF transceivers that include 6-meter capability can be modified for full band transmit coverage. In this case, a low pass filter for the 8m band would need to be added externally.

Depending on your RF output, the QRP Labs (above) may be used. If that is not sufficient for your permitted operating power, there are numerous LP Filter calculators online that will tell you the C and L needed to make a filter in a variety of configuration.

New comments are not allowed.