An economical solar kit for a 100W ham station 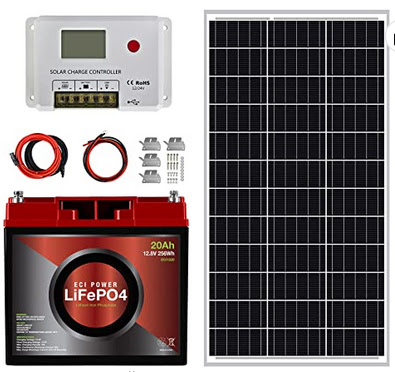 James K0UA recently posted a link to a LiFePO4 battery he uses on POTA activations - they are about half the price of Bioenno batteries of the same capacity.

A look around the brand's (ECI Power) other products shows a "100W Solar Starter Kit" that I wish had been available when I first started using the sun to power my shack.

That was years ago, and all the parts were bought individually: solar panel, charge controller, cabling, MC4 connectors, mounting hardware and battery. The combined cost was around $550. The foldable 100W panel that I use these days to charge my 12AH POTA battery costs $210 by itself.

Today you can find several manufacturers of complete kits with a charge (solar panel) and storage (battery) capacity that will easily power a 100W CW/SSB ham station for around $200. These starter kits can be easily expanded with a larger battery and additional series or parallel cells.

How long will a 20AH battery power a 100W station?

With no solar input, my 12AH LiFePO4 powers my FT-891 for 2 hours of continuous CW/SSB, contest-style transmitting and receiving. But with a 100W solar panel attached (and a sunny day) I often operate for three hours and the battery remains fully charged.

Three hours of CW/SSB operation at 100 watts on an overcast day reduces my battery by about 3 to 4AH - so on cloudy days I return home with a battery that is still 65-75% charged.

This would not be the case with FT8 operation due to the much higher duty cycle of that mode, so a larger battery would be necessary.

If you've ever thought about experimenting with solar power, the prices - even in this inflationary age - are more reasonable than they've ever been. The bundling of necessary components into one package makes the project simple, as does the fact that our major components operate natively from the 12-14V produced by the system.

I can tell you that it's quite fulfilling to turn on the main station transceiver, knowing that it is powered by nature and impervious to neighborhood power outages/fluctuations.