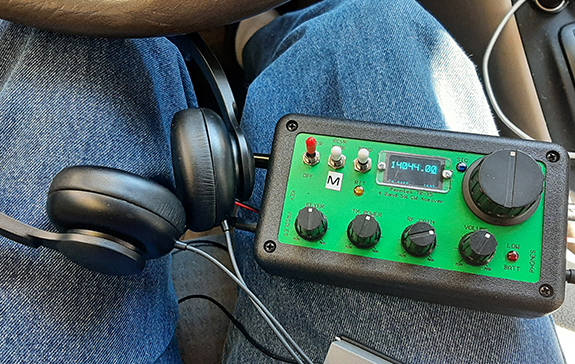 Because "warthog" sounds better in Latin...

My 5-POTA soiree for this new award category took about three hours this morning, most of which was the driving and setting up rather than actual operating.

The first four parks are all within 5 miles of each other - the 5th is 15 miles away.

With five QRP rigs on hand, it became a different rig for each park operation and it was fun to use my two infrequently used rigs - the (tr)uSDX and the mcHF. Three different sets of paddles were used and the antenna in each case was nothing more than an MFJ-1979 screwed into a magnet mount on top of the car.

I stayed on 20m for all locations and didn't deploy any radials - I let the car frame do double duty as transportation device and RF ground.

K4SP and I worked each other from 3 parks; I heard W5ESE's distinct callsign from two of the parks but only worked him from one. QSB was in and out, but only in small, bite-sized morsels compared to a few weeks ago when it was more extreme.

Lots of fun - thanks all, for the calls. And obrigado, spasiba.

Some notes about the rigs:

(tr)uSDX - used at K-6306. This is more than the "novelty rig" some consider it to be but its usefulness is hampered by the fact that everything is menu-driven - even the volume control. No adjustments can be made on the fly. Its design philosophy is the direct opposite of the two Penntek radios used. Still, it is tiny, all-mode capable, lightweight and cheap. No problem at all making contacts with 4.5 healthy watts out.

mcHF - used at K-7374. This is the rig that made me sell my KX2. It's not as good as the KX2 but it does have a pan display, and in my pre-POTA DXing days, that mattered. Using the KX2 after having had the mcHF for a while was like driving blind - I had no way of knowing what was up or down the band from me except by tuning there. I still like the mcHF and have had multiple offers from folks wanting to buy it. She still ain't for sale!

TR-35 - used at K-6455. This is the rig that worked CU2AA and UA3SKV. This is the radio I'll use for bicycling excursions this (Florida) "winter". It has everything I need and no menus to fool with - easy to operate, it's by far the most turn-key radio I own. Or, put another way, the quickest to airtime, upon arrival. Is that a spec? It oughta be. I think this is my favorite QRP radio due to its capabilities to size/weight ratio. John WA3RNC knocked it out of the park with this one.

TR-45L - used at K-5670. I had access to a picnic table here - the place a TR-45L feels most comfortable. I didn't need the rig's built-in tuner or its notch filter this time around but I did keep the meter in Reflected position just to stay aware of the low SWR of the whip. I used the rig's internal battery rather than the 3AH LiFePO4 used at the previous three parks. There is a kit version of this unique radio in the works and my soldering iron has been re-tipped in anticipation.

IC-705 - used at K-3615. The Cadillac. Does everything; does everything well, except stand up - but I rendered that a non-issue, cheaply and effectively. CU3AA boomed in here after my first CQ. I loves me that pan display, visible even in the Sunshine State's sunshine. This is easily the most capable radio I own, which, of course, comes at a price. This is a radio you can grow into, after you've become fluent with the features you originally bought it for. And firmware updates keep making it 'more better'.