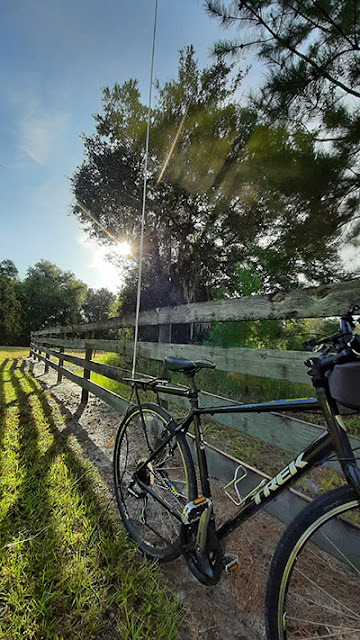 A recent test of my planned bicycle (while stationary!) POTA antenna turned into an in-the-field comparison of the two antenna tuners I had with me - an N7DDC ATU-10 autotuner and an Emtech ZM-2 manual tuner.

The rig in both cases was a (tr)uSDX and the antenna was a 17-foot whip (MFJ-1979) mounted to the bike's luggage rack, along with one to four 1/4-wave radials on the ground. Or none at all, just using the bike's frame as RF ground.

I also had a RigExpert AA-55 Zoom along with me because I wanted to see the effect of adding radials. And, I also wanted to see if it was feasible to use this antenna on 30 meters.

But the main mission was to determine which tuner would be best to take to the field.

I've always been a bit hesitant to use autotuners with rigs that operate at full power during a tune cycle. This is not the case with tuners built into rigs (or otherwise integrated into the rig's functionality) such as the KX2, KX3, etc. but the (tr)uSDX offers no easy way of reducing power during tuning.

An advantage of manual tuners, especially those with sharp tuning characteristics like the ZM-2 or the TR-45L's optional tuner, is that a very close tuning solution can usually be made without even transmitting, just by tuning for maximum receive noise.

The 90-minute POTA activation consisted of 30 minutes on-the-air and an hour tinkering with the antenna and tuners.

When I got home I decided to make some terminations and put numbers to the tuners. I had plenty of metal-film resistors and dozens of BNC connectors, so I soldered up 6 of them to simulate various SWR's that a tuner might see.

I terminated each tuner with each termination, then tuned for minimum SWR. Then the tuner was attached to the nanoVNA to measure its insertion loss, then to the AA-55 Zoom to measure the 1.5:1 bandwidth of the tuning solution.

The following results were obtained:

With few exceptions, each tuner performs well. Note that this test was made only on the 20 meter band.