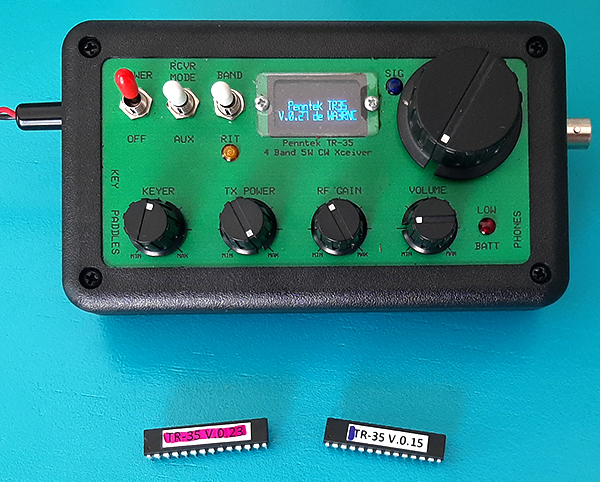 One of my pet peeves with the IC-705 is that, if I'm using the built-in memory keyer to call CQ and I want to cancel the outgoing message, a tap of either the dit or the dah paddles cancels it - but also sends the dit or dah out over the air.

This causes a dot (or dash) of self-QRM over the station you're trying to copy.

Elecraft, Small Wonder Labs, OHR, TiCK, KD1JV and everyone who's anyone in the making of CW rigs/keyers gets this - just not Icom.

A tap of the paddles cancels, but doesn't transmit the cancellation tap when the memory keyer is active.

Add the Penntek TR-35 with the latest firmware, to the list of those that get this right.

The V.0.27 firmware not only corrects the lengthy word spacing of the beta version of memory keyer, it also allows cancellation of an outgoing message with a tap of either side of the paddles without sending that tap to the world.

Why is this important?

Every now and then, during a CQ, someone will respond while the memory-generated CQ is in progress. Blame it on QRM, QSB or just bad timing by one of the ops (guilty myself at times). It's nice to be able to hit the paddle and go immediately into receive mode.

I'll be activating Half Moon Wildlife Management Area (K-6306), popular with horseback riders, this Wednesday with the TR-35. I'll be without a horse but I'll be using the TR-35's memory keyer like a rented mule.