I've only had the Penntek TR-35 exactly one week, but during that time I've:

and had many ragchews (and park huntings) on all four bands. I've also made selectivity, spectrum and MDS measurements.

Be forewarned - the following may sound like an advertisement, but it is not. I paid full price for the kit and have had no other communication with the kit's designer, John WA3RNC.

Now that that's out of the way, here is a fleshing-out of the notes I took during the week.

In 40 years of building kits, I've never seen one that is designed to prevent potential problems to the extent of the TR-35.

First off, the kit arrives about 70% pre-built and pre-aligned. Numerous SMD components are already installed and even the tedium of parts inventory has been rendered as mostly unnecessary due to how the parts are packaged. They come in three sleeves - one for each of two boards, plus the final assembly components (knobs, jacks, plugs, etc).

Within each sleeve, the components for each assembly step are each in their individual pocket. There are anywhere from 1 to 5 components per pocket.

Printed instructions and schematics for assembly and operation are included. These can also be

The Number 1 problem many builders have with kits is in the installation of toroidal inductors and transformers. With the TR-35, these arrive already wound and with the ends stripped of enamel and tinned. Therefore, they install as easily as any any other component. This also greatly reduces the construction time of the build.

Four crystals are numbered and are to be installed into their own specific place on the board for maximum effectiveness for receiver selectivity.

In my case, total build time was just under 4 hours. Each board took 1h20m.

There are no gotchas in the assembly procedure - just be sure to install the heat sink, insulator and final FET in the proper order. And don't omit the tiny insulator for the FET's mounting bolt. Also, pay attention to how the two banks of pins are installed onto each board. Photographs explain these steps clearly.

Thanks to the pre-alignment, there is very little left to be done once the boards are completed and no test equipment is needed other than a multimeter, your ears and a small tweaker to adjust the pots.

After a quick check for a short to ground of various voltage sources, the most important alignments are setting the TX bias and centering the passband frequency. Even if you've never built a kit before, you shouldn't let these steps worry you. The bias setting is done with your multimeter measuring input current; the passband can be set by ear.

Other alignments are for setting S-LED (as opposed to S-meter), Low Battery Voltage LED and sidetone volume.

That's it. With an antenna connected, you'll probably be hearing signals on the band even before you begin with alignment.

I like the ergonomics of the TR-35. Toggle switches and no menus were a large part of the attraction for me. The radio has a mini-Paraset look to it, yet much smaller, four bands, 10 ounces and 10 watts!

It also has a wide permissible DC input voltage, from 9.5 to 14.5 volts. This makes the radio usable with a variety of battery chemistries, at various levels of charge/discharge.

I did replace the knob on the tuner with one of a slightly larger diameter. This small change makes a big difference in improving the feel of tuning the rig around a band.

Each band also has one memory assignable to it. WA3RNC calls these "semi-permanent". So far, mine have been permanent without the semi-. These memories simply assign the frequency, within a band, that the TR-35 will come up on when switching to that band. I can change my mind and assign a different frequency later if I want to  (thus the semi- I suppose).

Also, the tuning encoder can be locked so that you don't inadvertently QSY by hitting the knob while reaching for a nacho.

The sidetone frequency is fixed at 700Hz. The sidetone's output level is set as one of the alignment procedures and I wish there was a way that this setting could be accessed with the radio still in its case. I may well drill a small hole in the housing to make this possible.

The sidetone level is affected, to a small extent, by the settings of the RF and AF Gain controls. But it is more affected by whether headphones or an external speaker is used. At home using a speaker, one level is appropriate; at a POTA site with headphones on, a slightly lower volume sidetone was more appropriate. To access this adjustment, the cover screws and the nuts holding the front panel controls must all be removed.

Another thing I wished for during my POTA op was a way to make sure my reflected power wasn't too high. I would trade the S-LED for an LED similar to that in an Emtech ZM-2 tuner whose level of illumination indicates how well the antenna is matched.

I used a resonant antenna for my most recent POTA activation but it's still nice to know, from one installation of the antenna to the next, that the SWR is not at a harmful level due to some problem with a connector, a nearby metallic awning or some other unforeseen variable encountered on portable operations. 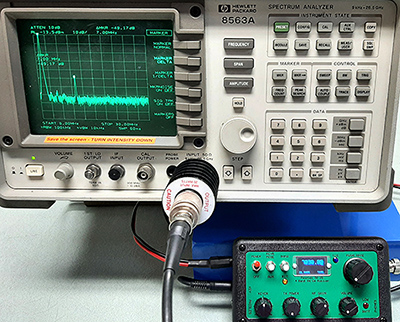 SSB stations sound great with whatever bandwidth is used in SSB mode - I didn't measure it.

In CW Wide, the bandwidth is 1.6 kHz (measured at -6 dB points). This is very wide for CW and could more appropriately be called SSB Narrow.

In CW Narrow, the bandwidth is 250 Hz, again at the -6 dB points. However, that's only half the story. Typically, to get the full picture, bandwidth is also measured at the -60 dB points. This, along with the -6 dB measurement, tells not only the width, but the shape of the filter, ie, how steep are the skirts?

I didn't make the -60 dB measurement but, by ear, I can tell that the skirts aren't very steep - and that's not a bad thing in this application. If they were steep, 250 Hz would, to many users, be too narrow except perhaps for contesting.

This was not the case with the TR-35 and I quickly realized that the effective bandwidth - taking into account 250 Hz @ -6 dB plus the relaxed skirts is somewhere much more appropriate for a portable multi-band QRP rig. Somewhere between the -6 and -60 dB points is an average bandwidth and I believe it's right around 400 Hz or so.

In other words, right on the money for the rig's designed application. Numbers don't lie, but sometimes they do mislead.

I do, however, wish the CW Wide was less wide.

Receiver performance during the DX contest was fantastic. I didn't work a single QRPer in the contest - most stations I worked were using a kilowatt, and I'm sure many of the US stations in my vicinity were too. Despite that, my receiver never de-sensed due to nearby super-strong stations, nor did the AGC prevent the receiver from coming back to full sensitivity immediately after a strong on-frequency station stopped transmitting.

MDS measurements (made only on 20m) show the TR-35 to be 8 dB better than the specs listed on WA3RNC's website for the radio. An ARRL review of the TR-25, showed that radio to be 10 dB better than advertised. WA3RNC is understating his kits' performance!

The look and color make for quite an attractive radio but I do wonder about the longevity of the labeling on a rig designed for outdoor use. Time will tell. The display is easy to see regardless of the ambient light and, like the radio itself, it has everything you need and nothing you don't.

What will the TR-35 be compared with?

For a CW op who likes POTA, SOTA, all-around QRP operation and casual contesting, sprints, etc, I can think of only one valid competitor - the SW-3B.

I owned an SW-3B for a while, had a lot of fun with it and have nothing bad to say about it. It is only available completely built and costs $188. It is a 3-bander for 20, 30 and 40 meters. Its output power is a bit less than that of the TR-35 at a given input voltage but it is half the weight of the TR-35.

For context of the TR-35's weight, it is within an ounce of that of my Samsung Galaxy smartphone. Put another way, I could detect the weight difference between the TR-35 and the SW-3B only if I were holding them both at the same time.

With the TR-35, you get an additional band - 17 meters, which is coming to life as the sun finally grows more and more spots. I'm seeing more POTA activity than ever before on 17m and I was glad to have it on my own recent outting.

QSY'ing around any band is so much easier with the TR-35. Three tuning rates are selectable and they are easily accessed with a push of the tuning knob. Unless, its firmware has been improved, the SW-3B has an awkward scroll order in which the tuning rate is changed from one digit to the not-so next. I describe that minor(?) annoyance in more detail here.

The lack of an ability to buy the SW-3B in kit form is disadvantageous in a way. Having built the TR-35, I'm familiar with its innards and how to align or adjust any of the parameters to my liking. If ever a switch or the display need replacing, I'm on it - no intimidation factor at all.

And the more recent SW-3B's have CW memories (they didn't when I had it) - the TR-35 does not (UPDATE: It does now, thanks to a firmware upgrade!). However, the SW-3B has to resort to menus in order to have this - the very thing the TR-35 is designed to avoid.

And, unlike the SW-3B, the TR-35 will drive an unamplified speaker to room-filling volume.

Aside from its excellent performance, the TR-35 will see much use from me for two reasons: I like the easy accessibility of its functions and I like the 17m band. Its inclusion allows me, not one, but two WARC bands with which to avoid contests if I'm not feeling the spirit. And 17m has been a good QRP DX band recently - and will continue to improve.