A few notes on the new SW-3B QRP transceiver 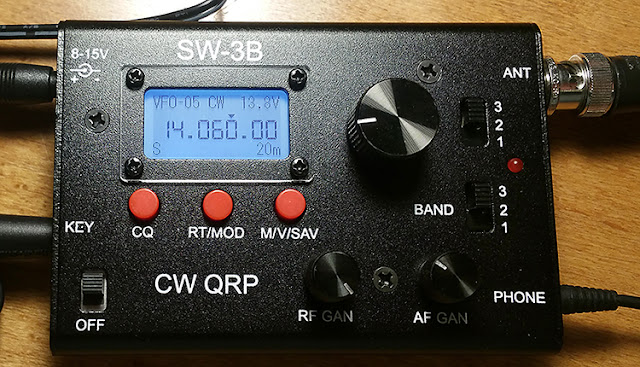 I received my SW-3B QRP CW transceiver several days ago and would like to offer a few details to others who may be interested. A manual is available online here.

The SW-3B has some obvious similarities to KD1JV's MTR-3B - and some significant differences. These differences, in my opinion, distinguish it from being a clone of the MTR-3B - otherwise I would not have bought one.

I have built and owned many of Steve KD1JV's fine rigs in the past, including an MTR-3B, which I sold when I bought a KX2. It was (and is!) a great radio for its intended purpose and I wanted to see how the SW-3B compared.

Similarities of the two radios:


The SW-3B has these additional features, not present in the MTR-3B:


The radio arrived well-packed from China 19 days after ordering it. Prior to that, Dale BA4TB was quick to answer a couple of emails from me regarding questions on the radio and provided a tracking number when it was sent.


Prior to putting the SW-3B on the air I hooked it up to my variable voltage power supply, a WM-2 QRP wattmeter and a dummy load to take readings of power out vs. DC voltage in on the three bands. Receive current draw at 13.8V is 37 mA with the backlight off, 43 mA with the light on. The backlight can be configured as always off, always on or "Automatic", turning on when a button of VFO dial is used and then turning off after a few seconds.

The radio can accept a supply voltage of 8-15 volts making it compatible with a variety of battery types and at various levels of charge/discharge. The chart shows the transmit characteristics of my SW-3B at three input voltages.

After these measurements it was time to put the rig on the air. LZ1WR was calling CQ on 20m. He was copied and worked with no problem. A few hours later I heard CT9/DL3YM working split, also on 20m. This gave me an opportunity to use the SW-3B's XIT function. I tuned to the station's transmit frequency, then enabled XIT and tuned about 1.3 kHz higher and started calling. After three tries, CT9/DL3YM was in the log.


Another way to do this would be to tune to the pile-up's frequency, then enable RIT and tune down to the DX station's transmit frequency in order to hear him and know when to call. Each method is sort of a "poor man's VFO-B" for simple rigs that don't have dual VFO's but do have either a RIT or XIT or, in the SW-3B's case - both. The LCD display on the SW-3B indicates how far away you are with either function - in 100 Hz steps for XIT and in 10 Hz steps for RIT.

After logging these stations I entered my callsign into the rig's memory to enable automatic CQing. A push of the "CQ" button initiates a 2X2 CQ (CQ CQ de callsign callsign K) with a push of the button.

The KEY jack detects whether a straight key or paddles are plugged in to the rig. With paddles, the internal keyer is automatically enabled. Keyer speed is set via a long press of the CQ button and a press of either the dit or dah side of the paddles. This setting (and the entered callsign) is saved into memory so that the rig's keyer comes up at that speed the next time the radio is turned on.

The internal keyer is functional and works well but I quickly came to prefer my external keyer so that I could more quickly change speeds if necessary.

The sidetone frequency is fixed at 600 Hz. Its volume is fixed relative to background audio and tracks it with the AF Gain control.

Bands are selected by what looks to be two distinct 3-position switches but it is actually one switch - the two are physically linked together so that only one need be moved; the other moves in step with it. A nice touch would have been to label the switch positions with the bands they refer to but as it is, Position 1 is 40 meters, 2 is 30m and 3 is 20m.

Each band has up to 8 frequency/mode memories. Upon each power-up, the SW-3B will be in memory mode. Turning the tuning dial cycles it through the memories for that band. A press of the M/V/SAVE button puts the rig into VFO mode on the chosen memory's frequency.

The SW-3B will receive SSB with a 2 kHz bandwidth and transmits CW while in that mode for cross-mode QSO's. I think I've done that twice in 40 years.

Forty minutes of participation in this morning's CW Ops CWT sprint resulted in 31 contacts, all easily made, including a DX contact (DK9PY). The speed of most exchanges was about 30 wpm with the rig being keyed by N3FJP's software made for this contest. I operated both search-and-pounce and ran a freq for a while. No problems at all with the rig at that speed though a narrower (than 400 Hz) filter would have been beneficial. But, of course, this is not meant to be a contest rig and I'm very happy with its performance.

1) The sequence of how the cursor moves when changing the tuning steps. As it is:


so to go from start-up to the 100 Hz digit, I have to press the button 4 times, two of which are for the same step size. This makes no sense and neither do the remaining sequences.

2) Have the rig power up in the state last used, either Memory or VFO - not always in the Memory state.

These are minor issues that I believe could be fixed with firmware changes. They don't detract from the rig's usefulness, especially in the area for which it was designed - as a small, very lightweight 3-band rig that puts out a full "QRP gallon".
.
.