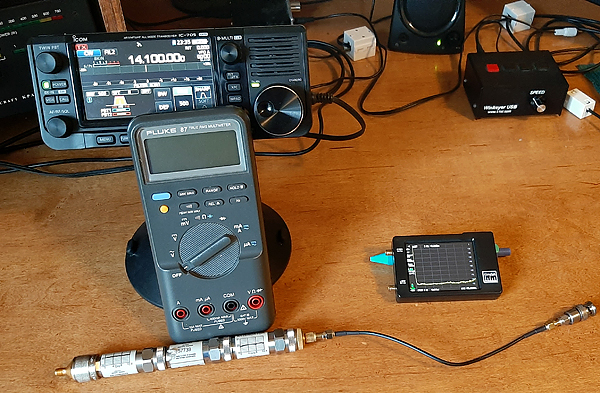 The popularity and low price of the nanoVNA and TinySA devices allow hams and other radio hobbyists to make measurements that were out of reach just a few years ago due to the expensive equipment required.

For those who have a TinySA, you not only have a spectrum analyzer - you also have a surprisingly accurate signal generator.

With a series of attenuators, a TinySA, RMS multimeter and some cabling, I had all I needed to make an uncalibrated MDS measurement of my radios. Maybe you do too. Here's how to do it.

If you need attenuators, I recommend the fixed type over step attenuators. Suitable SMA types are here, here and here. You'll need around 70dB of total attenuation. You could - and should - measure the actual attenuation of each individual attenuator with a nanoVNA.

My real intention here is not to determine the absolute MDS of a receiver; instead, I want to compare the receive sensitivity of my IC-705 in the ham bands relative to that outside the ham bands, for SWLing purposes.

I also want to compare the MDS of the IC-705 to that of other receivers here in the hamshack.

So relative MDS - as discernable by a 3dB change in audio RMS voltage from the rig, is the goal.

Since I don't have an RMS voltmeter with a dB scale, I'm using the AC voltage setting and converting the difference between signal (from the TinySA in Low Output [sig-gen] Mode) to no signal. A multiplication factor of 1.4 between these two readings equates to a 3dB change. It's important that the multimeter displays RMS voltage, not average voltage.

Note that I'm using external speakers with the set-up. The reason for that is that the IC-705 does not have an external speaker jack. It does have a headphone jack but the audio output from it is not sufficient to register properly on the multimeter. So the purpose of the external speakers is just to provide an amplified representation of the low-level audio so that the 3dB difference can be seen more clearly, ie in fractions of a volt rather than 10's of millivolts.

In the following video I forgot to do the "Level Cal" on-camera. It is under the Config menu and should be done after the Self Test. I did do it off-camera as indicated by the fact that the range numbers on the left side of the main screen are white rather than red.

I later made MDS measurements of the IC-705 at various frequencies. The preamp was OFF for all measurements.

I'm pleased to know that no receiver sensitivity is sacrificed when SWLing outside the ham bands, including within the AM broadcast band, and only has a 3dB decrease on 630/2200 meters.

At some point in the future I may take the IC-705 to my work QTH and measure the MDS at 50, 144 and 430 MHz using our $$$ calibrated equipment (Done. Results here). I also plan to measure the MDS value of the pre-amp setting at 28 MHz and higher.