Comparison on CW of Flex 6300 and Apache Labs Anan-10e 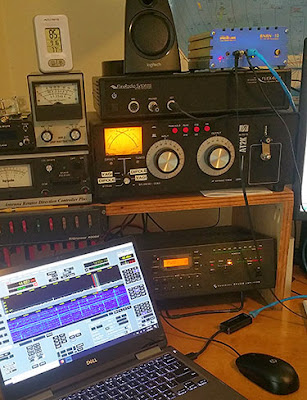 For the past eight months I've had essentially two separate stations on my desk - the Flex 6300 with an Asus desktop PC and the little Anan-10e connected to a small Dell laptop. Either (and both, at times) feed the Elecraft KPA-500 amplifier when needed.

Without my consciously planning it, the Flex has become my CW rig and the Anan-10e has been dedicated to operating FT8. This makes sense since the Flex is the better CW rig.

A recently purchased splitter allowed me to make comparisons of both rigs on FT8 and WSPR a few months ago (those results are here). The results surprised me and generated a lot of email. A subsequent comparison (between the Flex and a small RSPDuo on FT8 and WSPR, here) also produced surprising results.

But digital modes only produce numbers, ie SNR, as comparative values. The human element - actually hearing the signal - is missing and, until last night, I had not compared the rigs on CW.

Last night I was on 30m FT8 with the Anan-10e/laptop when I saw VK9XG (Christmas Island) spotted on 30m CW. I immediately closed WSJT-X, selected CW on the software running the rig and tuned the spotted frequency. I heard VK9XG, very weak but easy to copy. Enabling the noise reduction feature of the software (OpenHPSDR mRX) did exactly what it should - decreased the background noise without reducing the amplitude of the signal. Absolutely effective - I really need to make a YouTube video to demonstrate it. VK9XG popped out and was many degrees more copyable than he had been.

I turned on the KPA-500, enabled split operation on the software and easily found where VK9XG was listening and began calling him. Only a handful of other NA stations were calling and the DX station, not hearing any of us, called CQ and often specifically called CQ NA despite already being called.

The QRP Anan-10e only drives the KPA-500 to about 120 watts out so I turned on the Flex and switched cables (Key In to amp and paddles/keyer back to the Flex) while it booted up (60 seconds). The Flex will drive the KPA-500 to full output.

Once the Flex was up and tuned to the proper frequency I easily noticed what the previous SNR differences in FT8 had indicated. The station was weak to the point of not all CW characters being copyable. Enabling and manipulating NR and APF features in SmartSDR made only superficial differences in the signal's quality.

I heard VK9XG well enough to know when to call and would have been able to discern my own callsign if he'd responded to me. But, even with 600 watts, I was not able to work him - nor were many other callers and he soon went QRT.

If you read and compare the hardware specs of the Anan-10e and the Flex 6300, you will conclude that the Flex is the superior rig. So either the computer I'm using is penalizing the Flex or the Anan's software is superior.

Prior to buying the Anan, I'd heard nothing but good things about OpenHPSDR mRX - I can only echo those claims.