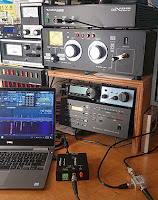 In this corner...weighing in at $265 - the (insert dramatic reverb) RSPduo from SDR Play (end reverb!).

With all the ingredients on hand I couldn't resist pitting David against Goliath. For the few weeks I've had the RSPduo, I've used it mostly to copy FT8 on various HF bands and 6 meters.

I had more in mind for it when I bought it but its performance is such that it's just too cool to let it run overnight or while I'm at work as it scoops signals from the ether. I look online periodically at the relevant websites - or the next morning - and am amazed anew.

At some point I started wondering how the Big Rig would have done in a similar time period on a given band.


I am an old customer of Mini-Circuits and trust their quality so I ordered the last remaining item I needed to put the little Duo up against the Flex 6300 - a splitter good from 1 - 700 MHz so that I could feed my antenna to each receiver simultaneously.

The idea was to use the SNR reports inherent in WSPR and FT8 exchanges to see which receiver heard the most signals and with what S/N ratio.

I made every effort possible to keep all variables to a minimum. Equal lengths of RG-58 connect each receiver to the splitter, both computers are running the same version of WSJT-X and each computer has an i7 processor (5th generation in the desktop/Flex and 8th generation in the laptop/Duo).

The splitter itself is spec'ed at having less than 0.2 dB of difference between ports at HF freqs but, to be fair, I alternated ports between the Flex and the Duo periodically. It made no noticeable difference in the results.

In addition to WSJT-X, I also used identical versions of GridTracker on each PC. The main feature of interest to me with this program was to keep a numerical count of each signal decoded by each receiver/PC combination. Every now and then a nonsensical signal is decoded so I did have to keep watch on the process to be sure that an indicated count was in fact valid and not comprised of ghost signals.

I also ran a screen recording function on each PC so I could look at the results later, pausing a screenshot as needed to interpret and make notes as to which receiver, if either, is performing better than the other on a given WSPR/FT8 cycle.

Testing even one band was a time consuming process, mainly due to the video editing involved. Therefore I chose to look at three bands - 20 meters during late afternoon/evening, 40 meters at night and 6 meters during the ARRL VHF Contest. I wanted a high concentration of signals available on each band in order to bring to light any issues of decoding weak signals in the vicinity of strong signals.

FT8 was used on all three bands mainly to see how closely-spaced signals were handled.


This is not a video to watch straight through without interaction. If you're truly interested in how the 'Duo compares to the Flex, you'll need to pause the video after each decode session and look for stations common to each receiver in order to compare SNR. And to do this you'll have to watch it full-screen.

I edited out most of the 15-second time between cycles of the FT8 reception - to examine and compare SNR numbers of identical stations on each receiver, just tap your space bar to pause the video. Otherwise the video would have been 45 minutes long...

I'm amazed at the results. As I set up for the test I did so with the idea of finding out how far the RSPduo lagged behind the Flex in terms of performance. Never did I imagine that it would be the other way around!

The difference between the receivers was most pronounced on 6 meters and I stopped the test several times to see if something needed to be adjusted in the Flex's operating software (SmartSDR) but all adjustments were set to peak the signal.

Differing screen resolutions caused a difference in how much of WSJT-X's decode window was visible so comparisons were more difficult than they would have been otherwise. Nevertheless, enough common stations are visible that allow direct comparisons that will indicate that the RSPduo receives stations with a significantly better S/N ratio the overwhelming majority of the time. This is true regardless of what band I'm on and includes bands not shown in this test.
.
.
Posted by John AE5X John AE5X at 2:28:00 PM