"SOS to the Rescue" 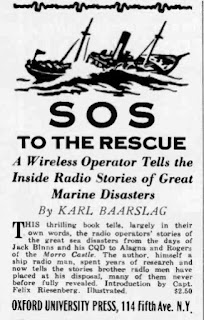 A few weeks ago I was looking at an old radio magazine from the year of my father's birth - 1936. In it was an ad for a newly published book that caught my eye. Long out of print of course, I wondered if I could find a copy at a reasonable price. Amazon to the rescue! A $25 copy in very good condition was soon on the way.

I don't normally enjoy reading older books - the prose is more formal and can often seems less personal and somewhat stilted to modern readers. Those that I do read, usually first-person accounts of historical events, are read for their information, not for entertainment.

"SOS to the Rescue", written by Karl Baarslag, was published in 1935. It is an immensely enjoyable book, written, for all intents and purposes, in contemporary English. Baarslag was a maritime radio operator in the 1920's and '30's and this book is a collection of maritime disasters that occurred in the first thirty years of radio's infancy, all told from the onboard radio operator's point of view.

In researching his book, ship logs and court records were reviewed - but best of all, the radio operators themselves were interviewed in New York, London and other places they were found to be living, sometimes months and other times years after the disaster. Their own words are woven into the narrative with the effect of making the book seem as if it is about current events - until reading an introductory sentence that begins, "although the Titanic disaster was 23 years ago...".

In the years preceding 1935, radio was still a new technology and it is obvious that Mr. Baarslag and those he writes about view it as both a marvel and a technological tool. To them it is amazing, it is magical, it is a source of income and it is means by which they can hire themselves out on a steamer and see the world. The tone of the writing fully captures these attributes and does so in a way that has appeal to the modern reader, even those without an understanding of radio or nautical terminology.

The stories are told chronologically beginning with the first distress call ever sent from a ship in 1899 and progressing up to 1934.

I learned that, as the "wireless men" onboard the Titanic were sending out their distress calls, none other than Guglielmo Marconi himself was in New York awaiting the arrival of the Titanic to take him back to Europe on her return trip. How's that for irony?

Another radioman, on a ship with a failed motor-generator and exhausted batteries, sent out his SOS with a bit of a twist - he held the key down on the final dit so that the receiving operators could hear the effect of the dying batteries and know why he would not be replying to them any further.

When the Empress of Ireland was hit by another ship late at night and the distress signal was ordered by the captain, the radioman on duty, Ron Ferguson, tells the author, "I sent it slowly as I knew that only juniors would be on watch at that time of night". Crawford Leslie, on duty at the shore station answered with "Here we are!" to which Ferguson replied "Go get your senior" so that traffic could be passed at a faster speed. After official traffic and position reports were passed, Ferguson offered to send notes ashore from passengers if they could scribble down on paper the contents of what they wanted to say. Unfortunately, what paper could be found was soggy and could not be written on. Ferguson noticed a steward wearing a crisply starched shirt whose fabric was ideal for the task and was "probably the first and only time that a shirt was used as a message form". The Empress of Ireland sank only 15 minutes after the collision with the loss of 1024 lives, 134 of which were children.

as the ship sank, taking him down with it. The operator on the receiving end of O'Loughlin's reports stated, "I would like to add that I was very much impressed by the way in which he handled the very difficult situation. He sent perfect Morse until the last, and there was no sign of panic in his sending. It was obvious that the last person he thought about was himself".

Other chapters tell of a fire at sea - and of the radioman who likely started it intentionally; a chapter entitled "Girl Marine Operators" tells the stories of Anna Nevins, Lena Michaelson, Graynella Packer and others; and the "Pioneer Wirelessmen" chapter describes the evolution from spark to arc to tube transmitters and of the coherer to magnetic to tube receivers with a photo of a "modern" (remember - written in 1935!) shipboard radio room.

I was pleasantly surprised at how enjoyable this book was to read. I knew I would learn a lot but I didn't expect to be so thoroughly entertained along the way. As mentioned earlier, a knowledge of radio terminology is not needed to get everything from this book that it has to offer - but, as hams, I think we may be able to come a tiny step closer than the non-radio-attuned reader in understanding what it might have felt like to be tasked with manning a key in some of the situations described.

If you can find a copy, I can't imagine too many people being disappointed in this book.