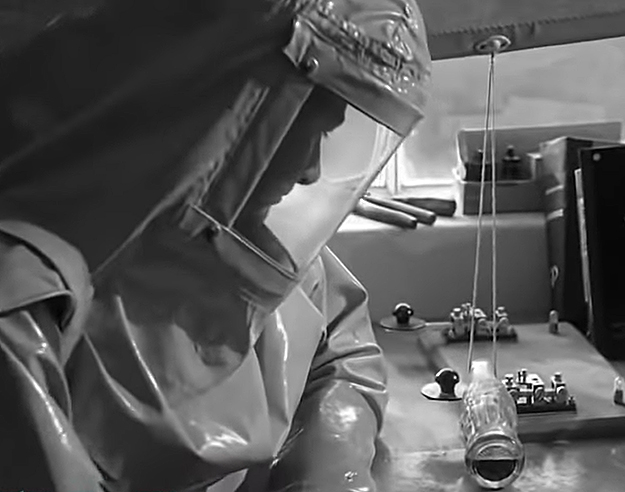 If you haven't seen it, On the Beach is a thought-provoking movie (aren't they all, from Stanley Kramer) starring Gregory Peck as a submarine commander in a post-nuclear world.

The gist of the movie is this:

"In 1964, World War 3 devastated the Northern Hemisphere, killing all humans there due to nuclear fallout. The only habitable areas are in the far reaches of the Southern Hemisphere, but air currents are slowly carrying the fallout south.

Australian survivors detect an incomprehensible Morse Code signal coming from the West Coast of the United States. The American nuclear submarine USS Sawfish, now under Royal Australian Navy command, is ordered to sail north to locate the source of the signal."

Once the source is located - a Coke bottle resting on a telegraph key - the crew member uses the key to report back to the Sawfish. While there is spoken dialog over the telegraphy, it's quite easy to make out "coke bottle on key by window" in CW.

When the movie was released in 1959, it premiered on all 7 continents (yes, even Antarctica).

Gregory Peck and his wife traveled to Russia for the screening, which was held at a workers' club, with 1,200 Soviet dignitaries, the foreign press corps, and diplomats.

It was a Big Deal back then.

On the Beach is unavailable on both Netflix and Amazon Prime but is available in its entirety on YouTube.

The Morse scene is 1h 37m into the video: