John Dillon WA3RNC of TR-25 and TR-35 fame was kind enough to loan me a prototype TR-45L recently and I've been have a great time putting this amazing new transceiver on the air from a variety of locations and with four different antennas.

When I bought a TR-35 almost a year ago, I prefaced my review of it with "I paid full price for the kit and have had no other communication with the kit's designer..." Obviously, that is not the case with the TR-45L so, lest you think that my opinion of the rig is influenced by the gesture of the loan, rest assured that I will be posting videos that will, to the greatest extent possible, allow you to get a feel for the radio as if you were sitting in front of it.

For many months, I have been watching John's website attentively, hoping for word of the TR-45L's availability. The look of the radio (with that big ole analog meter!) and the performance of its little brother (TR-35) had me chomping at the bit. The dark cloud of parts availability issues that delayed the TR-45L had a silver lining - they allowed John to modify the design of the rig in such a way as to include 17 meters. What was originally described as a 4-band transceiver now includes 17, 20, 30, 40 and 80 meters. 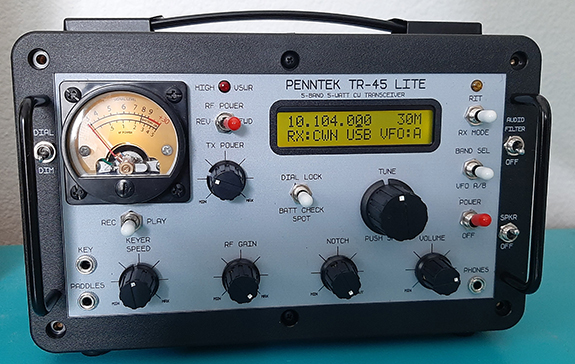 Like the TR-35, the TR-45L has an "each function has its own dedicated switch" design philosophy. No sub-menus, nothing to memorize and no cheat-sheet needed. It also offers three receive modes: CW Narrow, CW Wide and SSB. And two CW message memories, variable RF out, VFO dial lock and RIT. The innards of the radio contains two circuit boards and the panel mounted components, which will vary based on options ordered (battery and/or manual tuner).

And best of all: an audio notch filter and a beautiful, illuminated analog meter that reads either forward or reflected power during transmit and functions as an S-meter during receive. A toggle switch allows the meter to function briefly as a "Battery Check" level and a 'High VSWR' LED will alert users to high reflected power.

With optional internal battery (a 3S 5200maH LiIon) and optional bal/unbal tuner, weighs exactly three pounds. A 5.2 AH battery in a QRP rig will provide many hours of constant operation - I did three 2-hour POTA activations on a single charge. Current draw during receive is either 95 or 110 mA, depending on the illumination level selected. 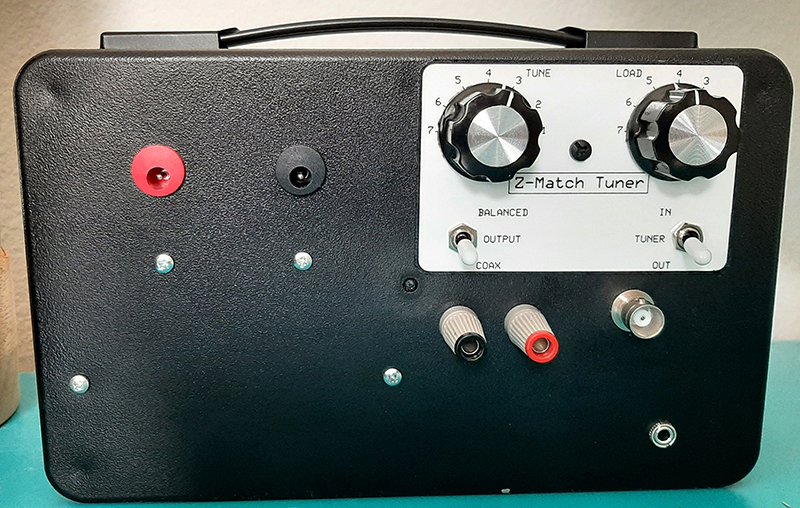 Side rails on the front panel are tall enough to protect the switches and meter without becoming obtrusive. 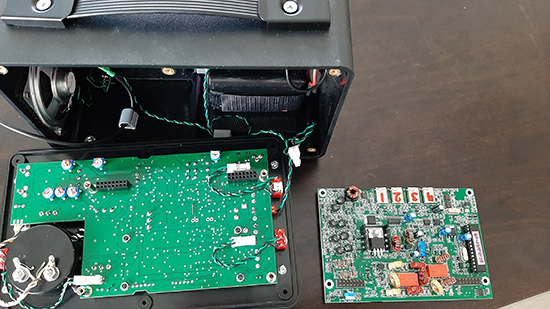 Tuning to and zero-beating a station is easy, smooth and totally free of backlash thanks to the optical encoder and its increased resolution. Short taps of the encoder toggle the tuning steps between 10 and 100 Hz steps; longer presses toggle between 1 and 1000 Hz steps.

The TR-45L's sidetone is fixed at 700 Hz and this is the tone that should be tuned for when zero-beating another station. A 700 Hz tone is produced by the rig when the 'Spot' switch is depressed; when that tone matches the pitch of the station with whom you want a QSO, you are zero-beat with that station. To new CW users, this means that you will have the pitch in that station's speaker/headphones that that operator has chosen as his preferred sidetone pitch (as long as he doesn't have his RIT engaged!).

A toggle switch on the right-hand side of the panel switches on or off either the internal speaker or an external speaker that may be plugged into a rear-panel jack. Even with headphones plugged in, the speaker is controlled by the switch, not whether or not headphones are in use.

I did not measure receiver selectivity since I don't currently have the means to measure it 40 dB down. I can measure it 6 dB down but this single-point measurement is meaningless in describing the shape of the response. But the bandwidth is reminiscent of my TR-35 that I used quite effectively in this year's ARRL DX Contest.

Additionally, there is an audio filter that can be engaged via, you guessed it - a toggle switch! This function has the effect of improving the signal to noise ratio on weaker signals.

MDS on 20 meters was measured at -129 dBm. An audio notch filter attenuates an offending QRM signal by 12 dB. A video demo is forthcoming.

Each of two VFO's per band can be programmed with your desired frequencies. I have the QRP calling frequency programmed for each band as well as a frequency lower down the band.

The RIT is good for +/- 5 kHz in 10 Hz steps. Rit remains available even when VFO dial lock is engaged. This allows your rig to remain locked on your spotted frequency, for example during a POTA activation, while still being able to tune in stations who may call slightly off frequency.

Two methods allow monitoring of how well the antenna is matched to the rig: the meter set for reverse power or the 'High VSWR' LED. Depending on band, my LED illuminates its warning when the SWR reaches anywhere from 1.9 to 2.5:1. My own preferred method is just to leave the meter in the reflected power position - I like it not to move at all and had no problem obtaining that state with a number of antenna types, even when operating on an adjacent band (17 and 30m with a 20/40m antenna).

Measurements of the TR-45L's spectral output show the rig to be well within FCC specs on all five bands. Spectrum measurements were taken at full output power.

The manual antenna tuner that can be ordered as an option for the TR-45L greatly increases the variety of antennas that can be used with the rig. Two toggle switches allow selection of the tuner being inline or not, and of the selection of balanced or unbalanced antennas. Each antenna type has its own jack.

For my first activation I used a PAR EFT-MTR. This is a 20-30-40m end-fed halfwave antenna, rsonant on 30m only if an SMA connector midway through the antenna's length is removed. This necessitates lowering the antenna to access the SMA. I was able to easily adjust the tuner to provide a match on 17 and 30 meters, even with the SAM remaining in place.

Finally I tried a random wire 55 feet long. Nothing special about that length - it was just what I had on-hand. the far end went to a tree branch about 25 feet high and another wire, 30-ish feet long, was laid on the ground. This is best interpreted as "balanced" antenna, so it was connected to those jacks via a banana plug. 17-80m tuned, no problem.

In all cases, I've been able to tune to a good match without even transmitting, just by tuning for maximum receive noise. I then put the rig to half power (just in case) flip the meter switch to read reverse power, hit the paddles and touch up the tuning, if needed.

When considering a new radio I always ask myself "What does it compare with?" There is nothing out there that compares with the TR-45L - it is refreshingly unique in a number of ways. The analog meter, toggle switches and the lack of menus (thank you!) see to that. It is a good-looking radio that doesn't compromise on performance.

My logbook contains entries from all over North America and 12 countries in Europe, all on battery power, from parks, using hastily-erected antennas. Is that a scientific observation? No. Is it fun? Yes, addictively so!

In the coming days I will be uploading videos to YouTube, demonstrating some of the features described here.