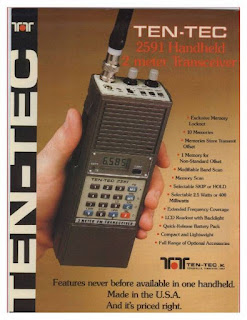 An announcement was made yesterday that all Ten Tec radios in for repair at the Sevierville facility will be returned, unrepaired, to their owners at Ten Tec's expense.

IMO, Ten Tec hasn't been Ten Tec for many years. The attempt at keeping the company going is admirable and many of us give due credit to Mike Dishop N8WFF for his efforts in this regard, along with those of many supportive Ten Tec owners around the world.

Covid (rather than, more correctly, our response to Covid) will be blamed for parts shortages, but Ten Tec started circling the drain over a decade ago after years of would-be Ten Tec buyers began migrating to a higher-performing rig, the K3.

Top DXers, DXpeditioners and contesters traded their Omnis for K3's and it was "Goodbye, Ten Tec".

Despite the fact that radios are inanimate objects, they help us to create memories and therefore take on sentimental value. As a ham whose first rig was a Century 21 back in '78, I'm sorry to see this latest bit of news, even though I said my goodbye's to Ten Tec a K3-ago.