The new Elecraft K4 has been added to Rob Sherwood's much-vaunted list and many will be surprised at the placement at #13 of this new flagship radio.

Also above it are direct-sampling SDR radios from Flex (from 2014 and still #2 on the list!) and Apache Labs.

Two things about Sherwood's list: if your favorite radio ranks high, you use this fact to brag about your rig and your astute purchase decision. If your radio is low on the list, you dismiss the criteria used to rank the radios and talk up the other specs that don't contribute to the radio's placement.

This if, then interpretation allows any radio to be Awesome! no matter where it is on the list.

Elecraft's official position on the K4's placement on Sherwood's list: "We're quite pleased with his test results...".

I'll admit to being surprised at the K4's position on the list but I'm even more surprised that Elecraft has chosen to be a one-radio company, no longer offering the higher-performing K3S.

The K3 became the rig of choice, not just for top contesters and DXers, but for DXpeditioners too. It was small, lightweight and reliable. I seriously doubt the K4 will be as reliable to take along on a DXpedition to some remote location. Added complexity = reduced reliablity. 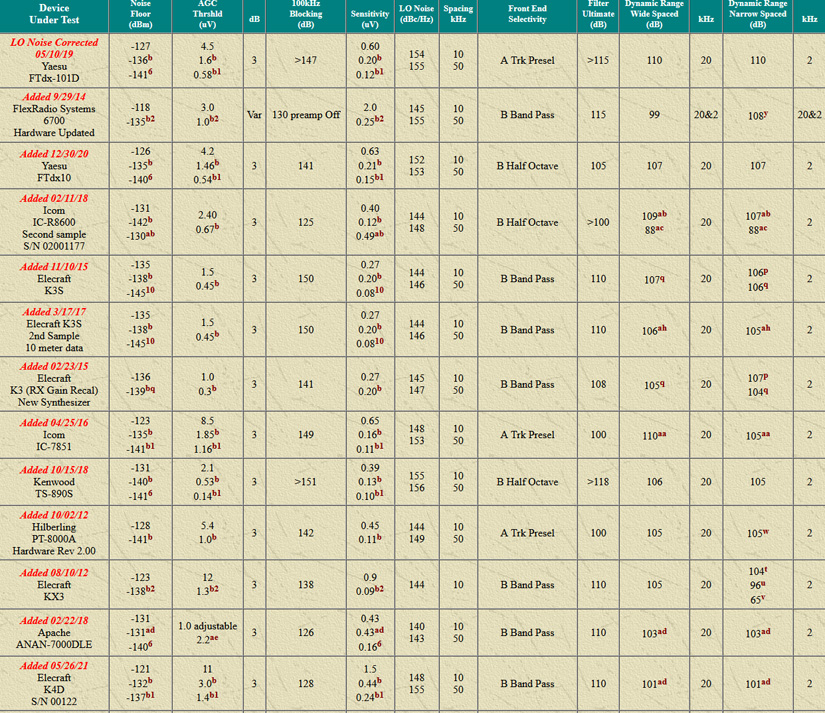 .
Update:
From Rob Sherwood regarding his data on the K4:
Comparing laboratory receiver measurements is a complex subject.

My recent post of Elecraft K4 lab measurements has resulted in some inaccurate conclusions by some readers of my long form report and my web table. The “notes” portion of my report made some comparisons to the Icom IC-7610 and Flex 6000 series transceivers. All three have similar architecture. One must first realize that the measured values for dynamic range, ADC overrange (overload) and RMDR (reciprocal mixing dynamic range)/ phase noise values (as listed on my web table) are all relative to the noise floor of a given radio. All transceivers currently in production have adequate sensitivity on 10 meters, let alone 6 meters. All direct sampling transceivers have a similar dynamic range. This is simply physics. An ADC by itself has a given noise floor, and a maximum signal voltage it can handle without overload. This dynamic range is about the same for all ADCs in amateur radio equipment. The ADC in the K4 is the same one used in the IC-7610. The Flex ADC chip is different, but it has similar performance.

The main difference among these three brands (Elecraft, Flex and Icom) is the gain between the antenna and the input to the ADC chip. With no preamp enabled on a Flex or the K4, there is no gain stage driving the ADC. In the case of the Icom 7610 (and the 7300), there is a 20 dB ADC driver chip in the circuit all the time. Note: All these transceivers have preamps and attenuators that should be used to set the “net gain” that is driving the ADC chip. This chosen net gain should be different on 10 meters compared to 160 meters. Band noise on 10 meters is typically 30 dB lower than band noise on 160 meters. The operator of any radio should take this into account when deciding to enable a preamp or an attenuator.

Let’s look at the receiver noise floor of three different brands and models to understand why each should be operated differently. Noise floors are normally published in a 500-Hz CW bandwidth for consistency. Also listed is dynamic range.

The noise floor difference is 21 dB and all are direct sampling radios. The dynamic range values are virtually identical. No one on the air could possibly tell the difference as far as dynamic range. It should be clear that these radios need different amounts of preamp gain or attenuation depending on which band it is being operated. Flex transceivers will need preamp gain on 10 meters, and the Icom should be operated with attenuation on 160 and 80 meters (and likely 40 meters). The K4 is in the middle, and remember these numbers are with NO PREAMP at all.

I made the following statement in my long form report. “If the 7610 is adjusted for 12 dB of attenuation, the noise floor of the 7610 will be the same as the K4.

In this case the K4 will over-range (overload) the ADC at a level 6 dB higher (better) than the Icom. (I added the comments in parentheses for clarity.) When comparing radios they should be adjusted for the same noise floor or the overload level is meaningless. I believe many hams are reluctant to use an attenuator when they should, and tend to use a preamp when it is inappropriate.

Remember: Band noise varies by 30 dB from 10m to 160m, and receiver noise floor with no preamp varies by 21 dB in these three examples. Another subject that exists is there are two main architectures in current product offerings: Superhet with roofing filters and direct sampling, which by definition can NEVER have a roofing filter.

In very difficult RF environments, the superhet with a roofing filter has an advantage when dealing with VERY strong out-of-passband signals such as those line-of-sight or Field Day. The K3S has a blocking level at least 20 dB higher than direct sampling radios. The K4HD will likely be similar to a K3S. Most of us most of the time do not have to deal with extremely strong signals. I have never seen a skip signal overload a direct sampling radio at my contest station in rural Colorado. With a 7610 with no preamp, overload would be at S9+64 dB. With no preamp a K4 would overload at S9+82 dB, but that is with a different receiver noise floor.

Let’s quickly look at three different Elecraft radios, the K3S, the KX3 and the K4. The K3S is a superhet, and its gain with no preamp is similar to the Icom 7610. The KX3 is a completely different architecture, and it has a very wide range of preamp gain. Its limitation, as identified in the footnotes on my web page, is its opposite sideband rejection at around 65 dB. The K4 is direct sampling, and on the lower bands, where no preamp is needed, will handle very strong signals better than the 7610 with no attenuation.