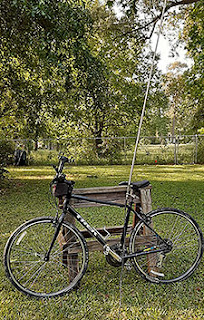 I did a test this morning of what I'd hoped would be an operational set-up for park operations accessed via bicycle and ended up regretting selling both my Elecraft T1 and Emtech ZM-2 tuners.

The set-up was this:
The plan was to operate on 20m CW where a 1/4-wave vertical is a few inches short of 17 feet.

With two radials laid out on the ground, I attached the mcHF to the antenna and heard a good number of strong stations. So far, so good.

Upon answering a CQ'er the mcHF's SWR meter showed 3:1 so I immediately stopped to confirm what I was seeing with the antenna analyzer, thinking I might need to decrease the length of the mast just a bit.

I managed to get the SWR down to 2.2:1 and the analyzer indicated that the antenna was resonant at that point, ie almost no reactance. That's great but I still need a lower SWR risk harming the transceiver.

Two more radials were then added with very little effect. A 2 MHz sweep centered on 14.060 MHz showed that 2:1 was as good as I was going to get without some sort of Z-matching network.

Moral of the story: Even a resonant antenna can have an unacceptably high SWR.

An antenna tuner would have easily taken care of this problem and one is on the way for the mcHF,
currently in the Cvirus-delayed mail somewhere between here and Ukraine.

My next bike trip with radio will include a PAR end-fed, nylon cord and a weight - hopefully this Saturday.
.
.
Posted by John AE5X John AE5X at 10:19:00 AM