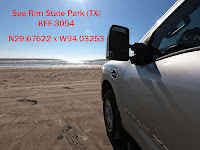 Yesterday's trip to Sea Rim State Park was a fun and well-needed excursion that resulted in good QSO's, both on and off the air. The sun shone only briefly at the very beginning, then cloud cover (and eventually rain on the drive home) ended the trip.

As expected, the higher bands were in good shape but, due to a contest, most of my time was spent on 17m CW and FT8.

Unfortunately, the contest also affected results on 17m in that the spots of my operation were quickly lost in the sea of contest-related spots. As a result, most of those I worked on CW were those who actively seek out parks operations.

It was a different story on FT8 and I was glad to have brought the laptop along. It was especially fun to work Mike VE9KK. Also going into the log were stations from Belgium, Germany and a rather long chat with a station in Argentina.

The Hardrock-50 performed well on both modes but, for continued FT8 operation, a small fan would definitely be an asset.

The amp's designer mentioned that temperatures of around 160F will not harm the amp - mine only rose to 140F during FT8 ops; at that point I dialed the power down to a 30-watt output. At home, I do have a fan on the heatsink and it never goes above 115F regardless of the power out or duty cycle.


The beach was mostly empty. If this had been my only time here, I would attribute that to the pandemic, however it was as sparsely populated the last time I was here a few weeks ago. The park itself is small and spotlessly clean & neat.

There are hookups for about 12 RV's and direct access to the beach about 200 feet away from the camping sites. The beach sand is hard-packed and easily driveable with any vehicle - no 4WD necessary. Total length of driveable beach is about 4 miles.

After about an hour, a Jeep pulled up nearby and a couple came over, curious as to what I was doing, maintaining a certain physical distance that is the norm these days. I explained a bit about ham radio and showed them the set-up. The man was a recently retired physician and they were touring the country in a very nice Class A motorhome, spending the winter months in the southern states before returning home to Maryland.


The conversation turned to the pandemic as I explained that part of the reason for me being at the park was to cure my minor bout of cabin fever. It was interesting to hear a doctor's take on it all, including the political aspect so often in the news.

We were of kindred spirits, agreeing that Trump is doing an excellent job of marshaling elements of both the private sector and the federal in an effort to mitigate the severity of the disease. Further, we also agreed that the leftist media and the children who succumb to its propaganda amount to more of an infestation than the virus itself, viewing the world through a patina of hate and emotional immaturity.

Our conversation concluded with an exchange of tips and info on other area parks as we are making preparations for a bit of RV travel ourselves. All in all, a very fun day - thanks for the contacts.