With that order now cancelled I've been roaming the web for an alternative to the Elecraft KXPA-100. Here were the contenders (it's a short list):

Juma PA-100D - the big brother of this amplifier was recently ordered by DXpeditioner Tom KC0W. After 4 months, he still likes it and plans on using it with his KX3 (which will drive it to a full kw) on a DXpedition to YS (El Salvador to non-DXers) next month. But Juma's website lists the PA-100D as "not in stock". Unfortunately, they don't respond to requests for info on when it may again be available. This leads us to:

Chinee Copy of PA-100D - at what point does it become ethical to buy these pirated copies? Never? When the original manufacturer ignores its would-be customers? To many hams, ethics never enters the sphere - only dollars, and the cheaper supplier wins. FWIW, this eBay offering is an already-built version of the Juma kit.

And the winner is: 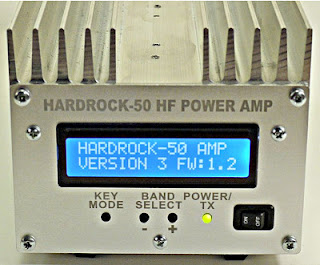 Hardrock-50 - this 50-watt amp kit has a long and stellar history. Just try to find a negative review about it. It has 3dB less output than the others ("half an S-unit" in CB-speak) and costs 3.5dB less than the Elecraft amp.

A $30 option allows this amp to automatically follow band switching commands from a KX3 and a built-in autotuner is available. Total price with KX2/KX3 compatibility, autotuner and QSK option - $557.

The amp itself, and the build process, is extensively documented and has an active forum of satisfied users.

So why now? A few reasons: