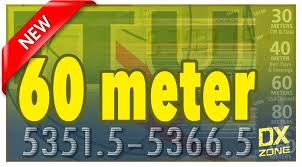 I've never been interested in the channelized nature of the 60m band and, until a few days ago, have never even tuned there.

What makes the band palatable is FT8.

FT8 is channelized in that we tune to a specified frequency and then leave the VFO alone for operation within a 3 kHz window. In effect, we channelize any band on which we operate FT8 or any of the other modes within WSJT-X.

No new antenna was necessary; just new settings on the antenna tuner to make the 80m dipole seem juuuussst right to the rig - not too capacitive; not too inductive. As if Goldilocks finally got her ham ticket.
My first contact (notice I didn't say QSO - there is a difference) on 60m FT8 was with 5T2AI so I'm definitely off to a positive start.

There is some question as to the legality of us US hams using FT8 on the band and a few have written the ARRL seeking clarification which has not yet come. Even the ARRL admits that there is room for interpretation, stating:

It is certainly possible to interpret the FCC Report and Order somewhat broadly as it concerns digital operating on the band, but be careful not to read too much into the text.Therefore, as a practical matter it appears that any J2D data emission is to be permitted up to a bandwidth of 2.8 kHz, provided that care is exercised to limit the length of transmissions.

I plan to limit the length of my transmissions to 15 seconds each...

As written, the FCC states that PSK31 and Pactor III may be used on 60 meters. Pactor III is a full 2 kHz wide - several dozen FT8 stations can operate within that bandwidth.

There is no shortage of US stations operating FT8 in the evening, though not enough to make a pile-up even for a rare callsign like 5T2AI. FT8 activity takes place on a VFO frequency of 5357.0 kHz. Come join the fun.
.
.
Posted by John AE5X John AE5X at 12:01:00 AM