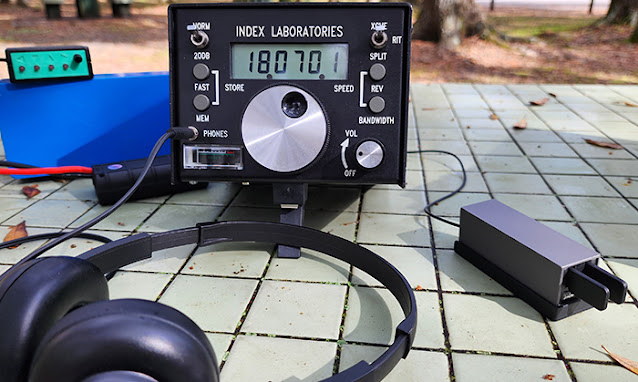 As much as I dislike prime numbers, I made 41 contacts today from K-6455 in Central Florida.

In an effort to mitigate my primonumerophobia, I briefly considered deleting a Belgian contact from the log - that would give me an even 40 - and once you've worked a Belgian, haven't you really worked them all?!

But then I remembered that I paper-logged the first contact prior to getting Hamrs set up on my smartphone. That's 42 contacts total - and Franki OQ5M stays in the log! On 12m no less. Thanks for the WARC-band contact, Franki!

Conditions on the high bands were purty gūd but it took me a while to figure that out.

This was my first use of the Index Labs QRP+ that arrived in the mail yesterday. Starting out on 40m with no stations in evidence, I thought I bought a lemon. Not a signal to be heard. Fighting back tears, I looked at the DX Cluster and at the POTA spotting page and saw that the high bands were open. Plenty of activity on 10, 12, and 15 meters.

Did I mention that the antenna was not my normal "Eh, that's good enuff" installation - this time it was the EFHW, erected completely vertically, courtesy of some tall accommodating oak trees and my pneumatic AirBoss. 70 feet, straight up. First try, over the tall branch & up she goes. 10 minutes, total.

Jim W1PID told me it was snowing in New Hampshire. I couldn't resist telling him that it was 74F/23C here, with a little telegraphic laughter thrown in.

Speaking of telegraphic laughter, I was also called by HI3AA. Whenever a station in the Dominican Republic calls me on CW, I always think they're laughing at me...then I get the rest of the callsign. Those DR ops laugh a lot, don't they?

With seven DX entities worked in short order, I took my leave of 12m and explored a few other bands with contacts made from 10-30 meters.

"Why an ancient Index Labs QRP+", you may be wondering.

I liked it when it was first advertised in QST back in 1995 - but I couldn't afford the $595 price tag back then. Later versions were $695, and that's back when dollars had value.

It was unique in several ways: 10-160m coverage, small for the time (a relative term) and, with beauty being in the eye of the beholder, I consider it a good-looking radio...toggle switches, analog meter and a VFO knob big enough to serve as a spare tire dominating the front panel.

We don't have an RV anymore, but if we did, I could chock its wheels with an Index QRP+ and still get on the air with it in the shade of my slide-out. RVing is all about making things do double-duty.

On top of that, the QRP+ offers split capability and has a built-in keyer.

And it's cubical in shape, like a Borg vessel. I have been assimilated - resistance, though lengthy, was futile.

I had intended to make a video of this activation but the wind today is horrendous - any audio would have included wind noise as a major component so a video activation with the QRP+ will be later down the road.