Ham radio phraseology on US submarines 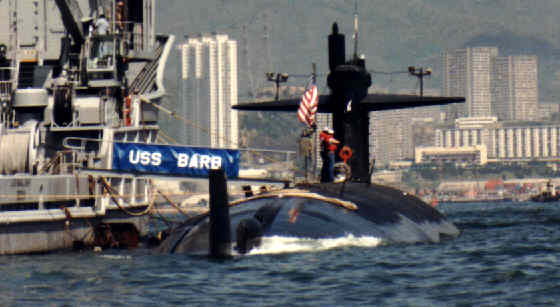 By the time I joined the Navy in January 1984, I'd been a ham for six years and was a General class licensee. I sold most of my gear (FT-101EE, FV-101) but kept a copy of my license with me at all times in case an opportunity presented itself in some exotic locale.

With the exception of beaches, it was two years before I saw any saltwater. Navy schools in Orlando, Pensacola and Groton (CT) kept me mostly off the airwaves except for sporatic MARS ops from time to time. Ham radio was mostly forgotton, as was the lingo associated with it.

Then, finally, in late 1985, the schools were completed and it was time to get orders to report to a specific submarine. I put in my "dream sheet" - a list of locations I'd like to be stationed if a billet was available. In order of preference: San Diego, Pearl Harbor and Charleston.

I got San Diego and was given 10 days to get there and report aboard USS Barb. Upon arrival, I learned that the boat was deployed and that I would be flown to the location of her next port visit. A few weeks later, I was on a flight to Manila, PI, then a late-night bus to Subic Bay, along with two soon-to-be shipmates.

The whole thing was a fast-paced blur at the time.

I won't offend your sensibilities with a description of Subic Bay nightlife, but suffice it to say that my perception & recollection of ham radio receded even further from conscious thought. The hobby was so far away from my thoughts, it was if I'd never even been a ham.

And then it happened.

After several weeks pierside in Subic, we got underway. My first time going to sea; my first dive.

At one point I was in the control room, we had just come to periscope depth and over the 7MC I heard the radioman on duty, "Conn, radio - QSL the 0900 Zulu ZBO"

My ham radio hobby and my new life at sea suddenly converged.

The radioman, who eventually became my best friend, confirmed what I thought - that the broadcast that was meant specifically for our sub (a "ZBO") needed to be confirmed so that it would no longer be broadcast by the satellite.

After qualifying at my own job on board, I spent a lot of time in the radio room. I tried like the Dickens but none of the four radiomen were even remotely interested in getting into ham radio. And why would they be - they did radio for a living.

There were three other hams onboard besides me and they ran the gamut, from machinist to reactor operator.

For the four years I lived in that steel tube, every time I heard "QSL" - which was almost every time we went to PD - I remembered my hobby, even though I couldn't practice it.

And after five years, I was able to operate from an exotic locale and received the callsign VQ9BL. A story for another time.