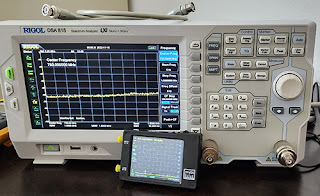 After yesterday's IMD measurements of the (tr)uSDX, I decided to have a look at the IC-705's IMD characteristics with two spectrum analyzers: a Rigol DSA-815 and the tinySA.

More than anything else, this comparison seems to help justify the purchase of the upcoming tinySA ULTRA - not that I need much help in that department.

As expected, third order IMD of the IC-705 was about 30dB down from the injected frequencies on both SA's, but...

...with the lowest resolution BW of the tinySA being only 3 kHz, it was unable to distinguish the RF representation of the two audio frequencies, seeing them only as one signal rather than two signals 1200 Hz apart (700 & 1900 Hz).

The new tinySA ULTRA has a minimum RBW of 200 Hz and would be able to see them as two distinct tones as with the Rigol. This IMO, rather than the higher upper frequency limit, is the best feature of the ULTRA over the original tinySA.