Since early December, I have been fortunate enough to be one of the beta-testers for a new product from Icom. The nondisclosure agreement that I signed expired today and I am now free to reveal what I think will be a very popular product for IC-705 owners. 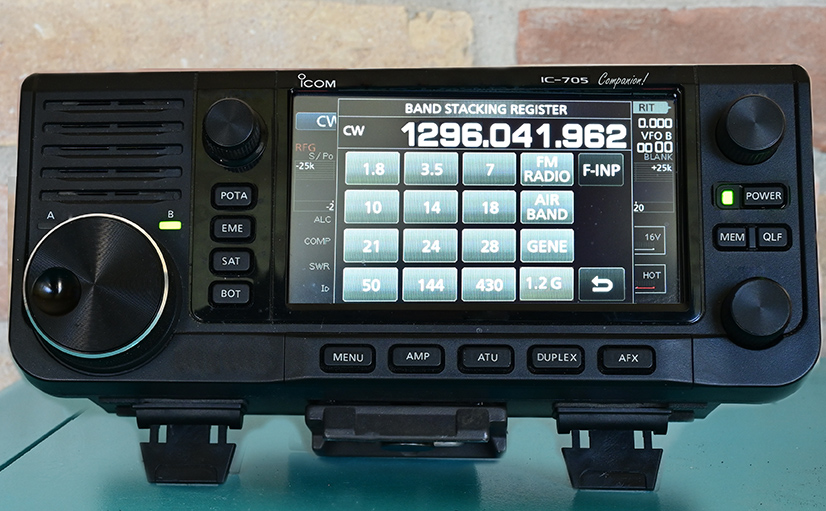 Long story short, Icom continues to listen to its customers. The same strategy and attention to detail that led to the design of the IC-705 has now produced the 705 Companion!

And, just as the IC-705 inherited SDR technology and other features from the IC-7300, the new 705 Companion! shares some of its DNA with the IC-9700 - Icom's flagship transceiver for VHF-and-up.

Many will regard the Companion! simply as a 100-watt amplifier designed specifically for the IC-705. It is that and so much more - but let's start there.

This portion of the Companion! uses a pair of RD70HVF-1C MOSFETs in push-pull configuration. These are the same devices used in the IC-7300 and allow up to 100 watts out on bands up to 54 MHz.

The internal frame of the Companion! is composed of a copper-titanium alloy for lightweight strength and superior heat dissipation characteristics. A very small heatsink of the same material (Little CuTi) allows for minimal run-time of the whisper-quiet 12-speed fan.

Icom listened to the complaints/requests of many IC-705 owners and potential owners. They will be happy to know that an automatic antenna tuner is built into the Companion!. And the Companion! has a QRP mode that allows the ATU to be used by those ops who wish to remain QRP.

An internal balun allows the Companion to tune both balanced and unbalanced antennas. Furthermore, the balun can be soft-key selected to have either a 1:1 or a 1:4 ratio.

The Companion! is made to be placed to the left of the IC-705. A front-facing speaker identical to that in the IC-705 is on the upper-left side of the Companion!. This places the two speakers as far apart as possible and allows for simulated stereo, via an AFX switch. This feature can be helpful in some QRM or weak signal situations. AFX is also available when using headphones.

Satellite users will appreciate the full duplex capability of the IC-705 when the Companion! is attached (requires firmware 1.28 or higher). This capability is only for 144 MHz and higher. Crossband operation with FM "Easy Sats" or sats with linear transponders capability makes the IC-705/Companion! combo one of the smallest and portable solutions available for those involved in this aspect of Amateur Radio.

And, perhaps best of all for satellite and EME aficionados/aficionadas, the Companion! contains a transverter that allows operation on the 23cm band. Many satellite  and EME operators have been using IC-705's to act as an IF for this band since soon after the release of the transceiver. With the Companion! attached, the IC-705's band keys will include the option for 1.2 GHz to be selected.

The Companion! has a few other front-panel hard keys that will be of interest to a variety of users:

When the IC-705 was released, many marveled at the extensive range of capabilities contained within its small form-factor. Some even had the irreverent audacity to compare it to a hypothetical KX4. The Companion! now adds significantly to that already-extensive list of features and, in so doing, brings 705-appeal to a new range of hams.