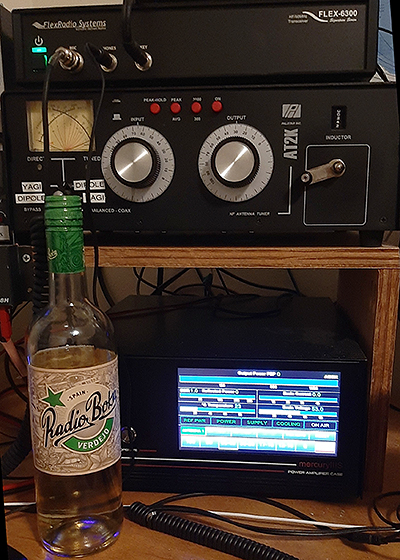 I've only made one contact in the ongoing contest but - Oh, what a day!

The Flex is back from its IC-705-mandated leave-of-absence and is playing well with the new Mercury 3S amp.

My one SSB contact was with Franki OQ5M. Yes, as it turns out, we both have microphones. The QRM on 20m was killer but I now have Franki in the log on that exotic-to-me mode.

And a surprise, completely unannounced DXpedition started up today: Ken LA7GIA, is in the Central African Republic operating as TL7M. Got him on 17m CW and 20m FT8.

Ken's primarily a CW op - and he starts his DXpedition during the biggest SSB contest of the year. Gotta love it! A lot of serious DXers/contesters had to make a difficult decision when TL7M popped up on the clusters on CW right in the middle of their phone run.

And best of all - after 4 decades in this hobby and 327 entities worked - I finally worked Monaco. On CW. During a phone contest.

Col MM0NDX is there with a group operating as 3A3A for the contest weekend. When he announced the group's plans, I told him I was looking forward to working Monaco as an ATNO. Col then told me that they would take a break from the contest from time to time and work a bit of CW - and that the ops knew I needed 3A.

Col, Paul, Ken, Franki - it's been a damn good day here. Thank you! Time to celebrate with a glass (or three) of Radio Boka.