The 30-year war of Lieutenant Onada 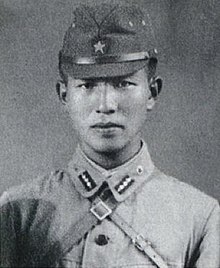 In the spring of 1974, Japanese army Lieutenant Hiroo Onada was finally relieved of duty. This was on the Philippine island of Lubang, where he'd been living in the jungle since 1944.

Lt. Onada was a World War 2 special forces officer whose orders were to remain on the island until he was relieved by Japanese forces:

“You are absolutely forbidden to die by your own hand. It may take three years, it may take five, but whatever happens, we’ll come back for you. Under no circumstances are you to give up your life voluntarily.”

For most of those 30 years of waiting (and waiting!), Onada was not alone. There were three others with him initially. One deserted, one was killed early on, and then his final companion, Private Kinshichi Kozuka was killed in 1972.

The book detailing Onada's story, No Surrender: My 30 Year War, is a fascinating read. It is equal parts war history, jungle survival and human psychology, all told in the first-person.

Omitted from the book is that Onada and his team killed 30 Filipinos after the war, usually in the process of killing a cow or "acquiring" other supplies from islanders unlucky enough to live in remote parts of Lubang. He was eventually given a full pardon by Philippine President Ferdinand Marcos.

Periodically, over the course of those 29 non-war years, Japanese teams tried to find Onada and convince him that the war was over. Newspapers were left for them to find and leaflets were dropped from planes. Onada and Kozuka saw this as evidence of a American plot. "Evidence" of this were such things as typographical errors and grammatical mistakes in various articles in the newspapers.

In 1965, they found a transistor radio left in a field by a villager. When they left Japan in 1944, all radios had tubes, few (if any) were powered by batteries. They were heavy and needed to warm-up before audio was produced.

And then, a transistor radio! What must they have thought? 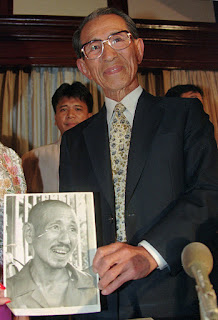 In 1974, the Japanese government located Lt. Onada (via traveler/adventurer Norio Suzuki) and sent his commanding officer from 1944, Major Yoshimi Taniguchi, to meet secretly with Onada and issue orders relieving him of duty. This brought an end to the lieutenant's mission and he returned to Japan and a hero's welcome.

I thoroughly enjoyed the book. It is short, at just over 200 pages.

And for the record, Hioro Onada was not the last Japanese hold-out from WW2 - that title belongs to Teruo Nakamura who surrendered to Indonesian forces in December of 1974.