No, it's not a stealthy set-up. It's not going to fit, KX2-like, in a shirt pocket, and there are certainly easier ways to put a 50-watt signal on the air from a portable location.

So what's the point of all this stuff?

I'm trying to whittle down my ham station to the bare essentials with the idea of spending a good amount of time RVing with part of that time being off the grid. The Flex/KPA-500/AT2K combo can't go there and I'll have a tear in my eye when I set them free.

Thus the IC-705, the HR-50 and the new quasi-portable solar panel. POTA activations are fun in their own right but they also serve as learning platform for operations of the type I envision.

More about all that later. 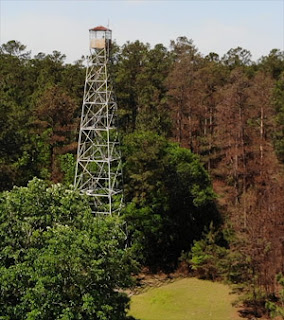 The first lesson learned at today's activation is: Antenna-supporting trees are not always situated in such a way as to allow solar panels to collect sunlight. Something in the name of the location - John Kirby Memorial State Forest - should have alerted me that shade would be plentiful. That pesky F-word again.

Lesson Two is yet to be taught - only the curriculum exists, and it does so as a single question: If your activation location contains a 140 ft/43m lookout tower, what would you bring for an antenna? A 20m HamStik with magnetic base to mount on the tin roof? A 1/4-wave sloper for 40 meters? The PAR end-fed with feedpoint (and operator) up top?

As Arnold said, I'll be back to this park - and probably soon...as in next weekend if something doesn't come along to jinx my fantasy of portable antenna awesomeness.

Surprisingly, there was a lot of QRN on 40 meters. I was in the middle of a forest, surrounded by more forest, and not a car, house or anything else man-made in sight or earshot. But S7 QRN. I know I had callers there but I just couldn't pull many out.

Come to think of it, there was a schoolbus on the road in but I think its QRN-making days ended some time ago.

There was a problem on 30m as well - my Hardrock-50 ain't amplifying. All the other bands are okay. I

thought it was my antenna but tests at home on the Cantenna show the same result. Time to dig in and look for a relay problem.

Despite that, numerous contacts on 30m (at 5 watts) went into yon log.

Twenty was fair, very active on both phone and CW.

All told, 50 contacts across the bands, including a few friends with whom I've been exchanging dots and dashes for many years. Always a pleasure.

No DX but a very interesting contact on 40m phone with PE1OAD/mm off the coast of Florida. I thought he might be on vacation, puttering around in a motorboat or going natural with the wind in a sailboat, but no - check out Michel's ride here.