Those four words came from Bioenno Power when I asked for the tracking number for a 12V 9AH battery I'd ordered several days earlier. They said that it was back-ordered and wouldn't ship for some time.

Before I could say "Cancel the order, I'll go with Dakota Lithium" they said I could have a 12V 12AH battery and they could ship it immediately "at no extra cost."

The four-cell LiFePO4 battery arrived two days later via UPS. I charged it, discharged it and charged it again.

Then I hooked it up to my battery analyzer and set it to discharge at a 3 amp rate.

With many battery types of various sizes and chemistries over the years, this is the first time I've ever tested a battery at a sizeable discharge rate and gotten more capacity than advertised. Usually, a battery only meets its advertised capacity when discharged at a rate that wouldn't even power a wristwatch.

A few hours later, I charged the battery again, then discharged it into the analyzer at a 6 amp rate: 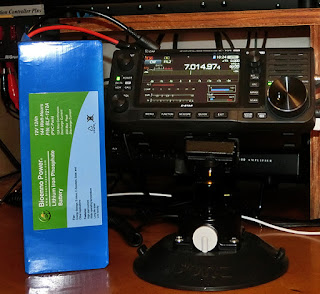 As you can see, I'm fairly conservative in where I define the battery's "Discharged" point. Maybe another 300-400 mAH could have been squeezed from the battery by discharging it further but at the cost of overall lifespan of the battery.

Needless to say, I'm happy with the battery's performance, though if I had it to do over again, I might wait until the 9AH version was back in stock.

About the chemistry: this is the first LiFePO4 battery I've ever had and it seems to hit the sweet spot in regards to voltage provided under a load - about 13 volts.

Three-cell LiIon and LiPo batteries under a load typical of the IC-705 provide about 11.8V. Four-cell versions would provide 15.7V. Too little and too much, respectively, for radios designed for 13.8 volts.