I read the book in two sittings, on two consecutive days - unusual for me, but I couldn't put the thing down. Despite that, I rate the book as Very Good rather than Fantastic.

Krautland Calling is Hal Lister's story of his time in Italy and Germany during the latter part of World War II. It was the book's subtitle that captured (pun intended) my attention: An American POW Radio Broadcaster in Nazi Germany. History is my favorite genre and I'm a ham radio op, so the book will probably interest me, right?

As the title suggests, Hal Lister becomes an announcer for a German propaganda station operating in the town of Schonach in southwestern Germany. The first 100 pages are the lead-up to the events that led to this outcome and they make for fascinating reading.

Upon capture (his second time as a POW) he unwittingly and incorrectly indicates that his pre-war job was as a radio announcer. Through sign language, he was trying to convey that he was a salesman but, confusion, incorrect use of English-German, etc - the Germans put him down as a radio announcer.

After a few weeks in a prison camp with other Americans, Brits and a few Aussies, Lister is taken from them and driven to far-away Schonach. There he meets a German private, Helmut Bruckmann, who becomes his "sponsor".

Bruckmann provides him with soap, a razor and a thorough de-lousing. Good food, wine and women are made available. Lister partakes of it all, while wondering "Why?" 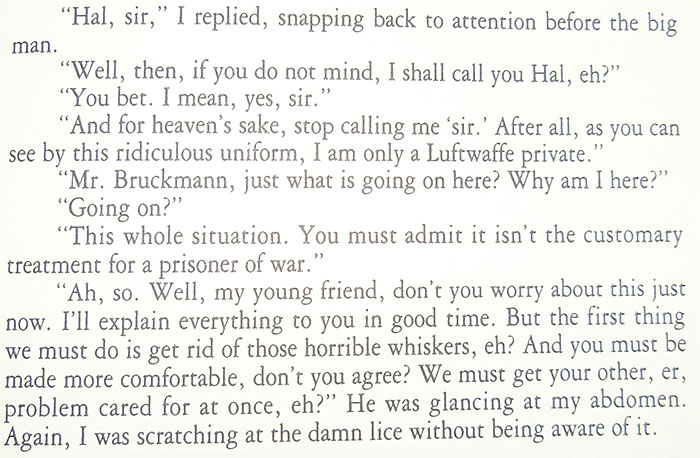 Headquarters for all of this is Hotel Lamm (there are many by that name in Germany). Several SS officers are among the group and they snap to attention and follow every order given by "Private" Bruckmann.

Finally, it is revealed to Lister that they are in need of an American radio announcer to produce a nightly, 30-minute program to be beamed to the US. They admit that it is a propaganda station but that Lister's sole job will be to pick the music (3 songs each night) and to read announcements from prisoners to their families back home. 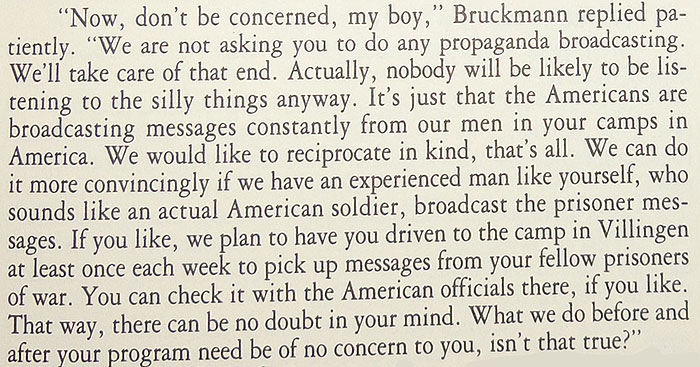 He will not be expected, Axis Sally-like, to tell Americans that the war is lost, surrender now, etc. He will only read letters and play music. In exchange, here is Cristianne and Inga. Have some more wine, Hal? And free run of the town, daily unmonitored walks, and a first name basis with Bruckmann and several SS men with whom he dines.

It is fascinating but, pardon my skepticism - a bit unbelievable at times.

Lister thinks about the offer but hesitates. So Bruckmann offers to take him to the nearest prison camp to confer with the senior American there, who happens to be a sergeant. They mutually "agree" that he would not be considered a collaborator since he is not directly making anti-Allied statements.

So, on one hand - a POW camp with lice, starvation rations, filth and disease. On the other hand - good food, relative freedom, friendships (both real & pretend) and female companionship.

Armed with the sergeant's approval, Lister agrees and begins producing the program. He and Bruckmann - now simply, Helmut - become friends and confidants, sharing meals together and talking about life after the war. Eventually, Bruckmann reveals that he is a member of the propaganda ministry, "two paygrades down from Goebbels", and travels around Germany setting up both local and shortwave stations.

Lister is housed with a local family, the Schilli's, who provide both room and board. Lister's German improves and he makes several friends in Schonach, mostly wives and mothers who want his reassurances about their sons and husbands who are in American POW camps. Wisely, he tells them what they want to hear. The Schilli's have a "large wooden radio" that Lister listens to after they've gone to sleep, keeping up with war news via the BBC.

Interspersed among the chapters detailing the Schonach activity are chapters of Lister's pre-capture activity...battles in Italy and Germany. It's as if to say, I worked with the enemy on this radio station but I also killed a lot of them prior to that, so it's okay.

A lot of the book reads like fantasy and, if Lister was treated as he describes, what else did he do - that he dare not make public - to merit such treatment? Surely the Germans could get someone to read letters and play music without kissing their ass to the extent they did Lister's.

There are several lengthy bits of German dialog (quotations) that aren't translated, nor do the preceding and following paragraphs give enough context to figure out what was probably said. I should have paid more attention as a child, listening to my maternal grandparents who lapsed into German frequently...

The last half of the book is more chapters of previous battles, alternating with Lister's escape plans and the German mood at Hotel Lamm as it became apparent that Germany would not be winning the war. Interpersonal details and relationships between various Nazi officers and social habits of differing classes of Germans in Schonach all make for interesting reading but nothing more about the radio station is mentioned.

One inconsistency: the book's description quotes Lister as radio announcer, saying "This is your nightly message and music program brought to you on the 290m band, 1031 kilocycles..." A program emanating from Germany and intended for listeners in North America would not be operating on such a frequency. I suppose that could be written off as a technicality, ie that Lister, in the intervening years, confused his American program's frequency with that of the French station. But, taken with other fantastical descriptions of people and events, it seems to be just one more thing that doesn't quite ring true.

It was an entertaining book but I kept thinking to myself, "How is this not collaboration?" The book was published in 1981, 36 years after the War. Lister died in 1987. There is little to no information about the veracity of the book anywhere online. The only Amazon reviews I could find were from someone claiming to be Lister's son and from someone claiming to be his grandson. That's it.