Eutectic or non-eutectic solder - does it matter?

The question should have occurred to me a long time ago:

Why are the tin/lead ratios of two common solder mixes so close? Surely there can't be that much of a difference in the melting point of 60/40 versus 63/37. 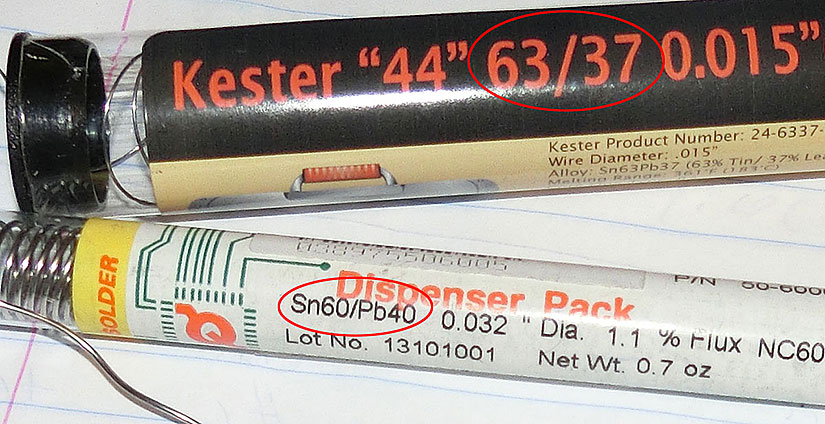 Answer: It's not about the melting temperature - and don't call me Shirley.

There are only 5C degrees of difference in the melting temperatures of these two ratios. But there is a very significant difference in how they melt and in how they re-solidify. I've been unaware of this until recently.

60/40 solder is non-eutectic. After melting, it re-solidifies gradually as the temperature cools down over a fairly broad range, spending about 5C degrees in the plastic region, from 183-188C.

63/37 solder is eutectic. It re-solidifies almost instantly once the temperature crosses 183C. There is no plastic region.

In theory, this should make for less likely cold solder joints than might occur with 60/40 solder since the joint will "freeze" more quickly leaving less chance for unintentional movement of the components being soldered.

In reality, the 5C degree plastic region of 60/40 is crossed in milliseconds during the cool-down period. Can such a brief period of time actually matter in arresting any movement? When the soldering iron is removed from a freshly soldered joint, it cools from a temperature much hotter than the solder's melting point - and does so quite quickly. That last 5C is a very insignificant (and therefore, extremely brief) portion of that total time.

Here's an interesting video that explains clearly the difference in the two solder compositions and the concept of eutectic temperature: