In 2012 I met with Dan WG5G at his home in San Antonio to talk about his experiences as a QRP DXer. The contents of our conversation were written up as an article that was published in QRP Quarterly in June 2011. Here is that article: 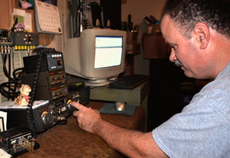 Me, pointing down the street: “What direction is that?”
Dan WG5G: “South Sudan!”

Until recently, I’d never actually met anyone on the DXCC Honor Roll. I imagined such operators as being blessed with rural, mostly coastal locations and antenna farms that were far out of reach of the average ham. In my mind’s eye, they also had state of the art equipment which had been frequently upgraded over the years, thus enabling a DXer to reach that ultimate DXing goal.

I was therefore quite surprised as I drove up to the QTH of Dan Walker WG5G. I was even more surprised when I saw the simplicity of the equipment that allowed Dan to achieve Honor Roll status – with 5 watts!

Dan lives in a typical residential neighborhood in San Antonio, Texas and is still using a rig he bought second-hand many years ago. That station consists of Kenwood’s QRP-only TS-130V, external VFO, remote coax switch and Heathkit QRP wattmeter & tuner.

Upgrades to WG5G over the years have been limited to the antenna and, although Dan currently has an enviable quad at 50 feet, that wasn’t always the case. But regardless of the antenna in use, rare DX callsigns have been a permanent feature of his logbook.

Licensed in 1978, Dan didn’t become active on the ham bands until 1984 when he upgraded to Extra. His first rig was Doug DeMaw W1FB’s  Sardine Sender for 80 meters, followed very soon thereafter by the TS-130V. Less than a year later, 216 countries had been confirmed using a 2 element Yagi at 35 feet from a house at the bottom of a hill.

Storm damage has been an unwitting contributor to Dan’s success in that every time an antenna was damaged, the philosophy has been to replace or rebuild with something a notch or two better. The Yagi was replaced with a 2-element quad (still at 35 feet) which took Dan’s DXCC/QRP count to 300.

At that point, the quad was modified to include a heavy duty boom and 3 more elements, making it a 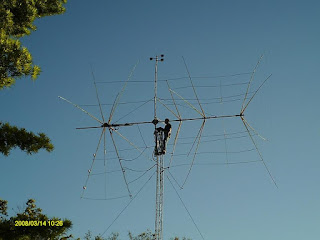 Keep in mind that after working 175 countries or so, each new country is usually associated with a pile-up. After 250 countries, those pile-ups get huge and often consist of callers from several continents with power levels ranging from 100 to 1500 watts – yet Dan was repeatedly getting through them with 5 watts.

There is a common misconception that the heavy lifting in a QSO containing a QRPer is done by the non-QRP station, due to his being able to pull the weak signal out of the muck. While there may be some truth to that in a limited way, it overlooks a very relevant fact of DXing: that a DXpedition isn’t listening specifically for QRPers – they’re just trying to work as many stations as possible during a particular opening. They have no way of knowing (and don’t care about) power levels of those calling; they’re simply working those they hear.

The fact that the QRPer gets heard by the distant station in a pile-up often containing many dozens of QRO callers is where skill and know-how come into play and there are two schools of thought on how to make that happen. In both cases, operating split is the great equalizer, diminishing the effect of various power levels and antenna gains in use by the many callers and injecting into the formula the opportunity for skill and technique, which, if they could be quantified, would be expressed in dB.
One strategy says to call where there is a clear frequency within the DX station’s listening range, with the theory that he’ll hear you there in the clear.
Dan’s method, which is echoed by Bob Locher W9KNI in The Complete DX’er, is to zero bea the station currently being worked by the DX & then call there after their exchange. The WG5G logbook is a testament to the effectiveness of that method. This seems like intuitive, common knowledge but the fact is that so many DXers use a “good enough” approach to zero beating that often places them outside the passband of the target DX station’s receiver.

“Good enough” isn’t good enough – precision and accuracy count, and often get the QRPer into the logbook when QRO operators are still calling.

Regarding pile-ups – to the beginning or non-DXer, a large CW pile-up often sounds like an overwhelming cacophony of noise that can be intimidating to jump into. Dan emphasizes that there is method in the madness and that the effective size of the pile-up is usually smaller than it seems due to the fact that many of its participants, rather than using a strategy, are simply calling on unproven frequencies within the split range, thereby eliminating themselves as valid competitors.

Dan’s DX Elmer back in the day was Tex Kennedy N5TX. For new, and not so new, DXers looking for an Elmer for fleshing out the above techniques (and others), Dan highly praises The Complete DX’er as a valuable how-to resource chock full of good info on the techniques of getting logged by rare DX stations, even though one may be “outgunned” in terms of power or antenna configuration.

I suppose we’ve all known people who can tell you who won a particular baseball or football game years ago, along with the names of those most responsible for the win. Dan has a similar knowledge of the operating habits of other DXers as well as of his own methodologies that worked for a given DXpedition and credits the dedication to the hobby of many others who have organized and operated the DXpeditions that fill his logbook.

I asked Dan what he thought accounted for him being the only QRPer to make DXCC Honor Roll and thought his answer would be some nugget of information I could apply to my own DXing. Dan’s explanation was that, even though there are other QRPers with 300+ countries confirmed, most of them migrated to QRP after first having been QRO DXers – Dan has been QRP from Day 1 and this fact has prevented him from having to re-work rare entities for QRP credit.

He also mentions that operating at 5 watts gives one an increased sense of band conditions and antenna effectiveness, the subtleties of which might go unnoticed at higher power levels.

Now at the point of needed entities only coming available every year or two, I wondered if DXing had grown boring. “Not at all,” was the reply. While waiting for DXpeditions to those entities, Dan stays sharp by engaging in pile-ups for band-countries and participates in contests from time to time, having won World in the ARRL 10m (CW QRP) Contest last December.