SDR technology and panoramic displays are relatively new to the hobby and their benefits are immediately obvious to anyone who's operated a radio so equipped.

An entire band - or several bands - can be seen at once. CW activity, digital, SSB - it's all there. Click on any signal and you hear it in the headphones or can zoom in on it. Zooming in, its sidebands and their characteristics can be discerned.

When such radios came to market (and became affordable!) I knew I had to have one. Even before
brand new companies like Flex explained it to me in their marketing descriptions, I knew what these displays and the unique way of tuning the band would allow. I'd known for over 20 years.


In 1985 I reported aboard USS Barb (SSN-596), a fast-attack submarine home-ported in beautiful San Diego, CA. The sub was deployed when I arrived so I was flown to its location in Subic Bay, Philippines to report aboard there. If you've heard any wild stories about the nightlife in Subic Bay, let me assure you - they're all true except that they have been toned down for delicate ears.

After a few weeks in Subic, we got underway - my first time going to sea on a submarine, and of course, my first dive. Soon after leaving port we were several hundred feet below the surface of the South China Sea and I, as a newbie, was in awe of everything around me. Any misgivings about the tons of water above me were completely neutralized by the technology surrounding me.

A modern submarine is, in a nutshell, a mobile,
watertight sensor. This appealed greatly to the ham that I already was (KA5BBL). Whatever ingredient or techno-bait it is that makes us engage in this radio hobby is there in droves in a submarine. They are weapons, of course, but they are also marvels of engineering and only a complete dullard (or a leftist, but I repeat myself) could fail to be impressed once inside one.

My longest time at sea was 72 days, 42 of which were spent at periscope depth. This was highly unusual for this small type of submarine as such time between ports is usually the realm of the big missile-carrying boomers. When we left port, our bow compartment passageway was lined with 5-gallon tins of flour, sugar and coffee. When we arrived at our next port, we'd been out of real food, ie square meals, for days and were eating whatever could be cobbled together by the cooks.

The reason for our lengthy time at sea was due to mechanical problems with our relief submarine. It was a much later Los Angeles class boat and we were happy as clams when it finally arrived.

During that 72 days I built a Heathkit HW-9 that I blogged about in the V1.0 version of this blog, now lost to history (or the Wayback machine?).

The movies fooled me - I thought a team of guys would be in there straining to hear a distant enemy and I wanted to take a turn with the headphones on, listening for what might lurk in the murky depths of the Arctic Ocean, the Gulf of Thailand or, can I say it? - the Sea of Okhotsk.

Instead, they look at various screens, each of which represented a different direction or a different section of the audio spectrum.

From merely looking at a trace on the waterfall, seasoned sonar ops could tell if a signal was headphones-worthy. They knew if a trace represented "biologics" (usually shrimp), volcanic activity (wide ranging in the Pacific rim), a commercial tanker or a Kilo-class Soviet submarine cavitating while snorkeling.

Clicking and zooming on an interesting trace allowed them to tell if a ship's screw had 3 or 4 blades. And if one of those blades had a nick or other imperfection, they knew.

These days, when I look at traces on my Flex or RSPduo, I can tell if they're RTTY, SSB or CW, and click on whomever I may want to work. It's all very normal now but it sure was interesting getting here.

.
.
Per the comments below, IC1(SS) Danny Robnett provides the foreground to the battle flag of the original USS Barb (SS220) in the background (Danny, can you move your head a bit to your right. Your other right.): 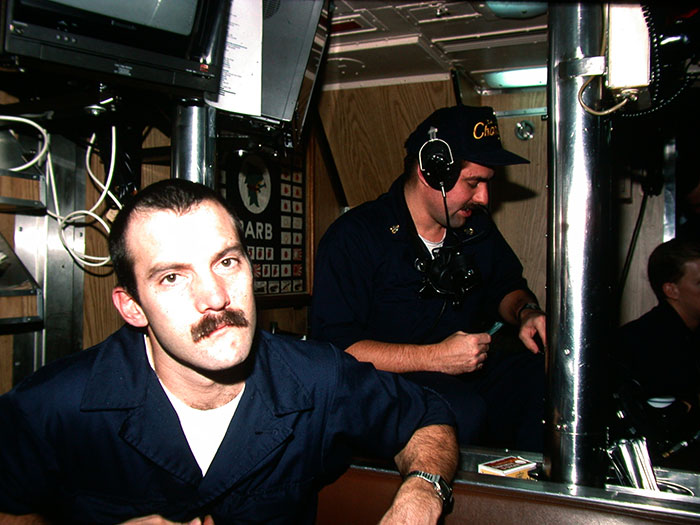