Radio Australia, and a sea story

From London Shortwave: "It's official: Radio Australia are no longer on shortwave..."

Nine of my 10 years in the Navy were spent in the Submarine Service - the other year was spent aboard a research ship operating between Perth, Australia and Singapore. Our mission was to make detailed contour charts of the sea floor in that area using precision fathometers and new-at-the-time GPS.

The detailed charts allow US submarines to get navigational fixes by correlating their soundings with the data we had collected without having to come to periscope depth for a satellite fix, thus the need for a small contingent of submariners on a surface ship. Gathering this data required the ship to stay at sea 28 days at a time, going back and forth in straight lines across the eastern Indian Ocean. At the end of those 28 days we would pull in to either Fremantle or Singapore for a week, then out again.

We enjoyed the sunlight, fresh air and the presence of civilian women onboard (oh, the stories I could tell if this weren't a family-friendly blog!) but what we missed - and missed greatly - was news from the world. Big things were happening at a fast pace in those days as the Iron Curtain began to crumble and we knew nothing of it for long, event-filled month-long chunks. 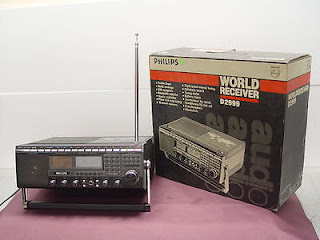 at a time. We starved for news and any kind of connection to the outside world so, during a port call to Singapore, I bought a Philips D2999 shortwave receiver. It was small enough for shipboard life, ran on AC or batteries and even had a BFO for occasionally listening to hams.

After having it for a few days and mentioning to the other crewmembers various things that were happening around the world, their interest grew and I eventually moved the radio from my stateroom to a common breakroom so that anyone could listen whenever they wanted. For a while we even had a printout of news events - a one-page daily newspaper - that we posted in various locations throughout the ship. Many of us were glued to the radio during the week of events in December 1989 that culminated in the Christmas Day execution of Romanian President Nicolae Ceaușescu.

Some of that news came from the VOA, some from the BBC and even from Radio Moscow. All had good signals into the Indian Ocean area at times. But regardless of time of day or ionospheric conditions, Radio Australia was always there, like a beacon - reliable, dependable and with great fidelity due to no selective fading. It was our primarily source of news.

Frequencies of many stations and the best times to hear them were posted near the radio but everyone knew our two main frequencies for Radio Australia without having to look it up. We listened to Radio Australia so much that the announcers eventually seemed to have lost their accents.

The beauty and utility of shortwave was introduced to people who otherwise would have had no interest in it. Thanks mainly to Radio Australia, we not only knew what was going on in the world, more importantly, we felt more a part of it and less isolated than we had been before.

The end of Radio Australia and so many other shortwave stations marks the end of an exciting era. What an amazing thing it was, in a pre-internet world, to be able to get information on the high seas, thousands of miles from land.

Farewell, Radio Australia and thanks for the trip down Memory Lane.
.
.
Posted by John AE5X John AE5X at 7:51:00 AM