A weather-resistant QRP rig from the last century

As Elecraft and KD1JV continue to develop smaller and more capable QRP rigs for outdoor use perhaps the next step in their development lies not size reduction but in environmental protection.

This year's NPOTA event has put people in the field with their radio gear - perhaps many of them wouldn't have considered it otherwise. Smart phone manufacturers are now giving increased attention to "weather-resistancy"...how long before HF ham radio manufacturers follow suit?

Ahead of its time in this area were the Bobcat series of mono-band CW rigs from the 1990's. There were two: a Bobcat 40 and a Bobcat 80. 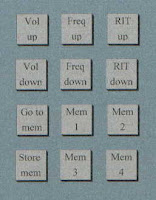 phones and satellite trackers were available to the general population. They were powered by 8 AA batteries and had a built-in CW key with a CW jack in case the operator preferred an external set of paddles. All jacks for external power, paddles and audio had screw-on caps with O-ring seals.

Designed to take advantage of NVIS propagation, the Bobcats were offered with a dipole antenna package and no feedline - the radios were meant to be operated at the center of the dipole (and suspended from it!) at 4 to 6 feet off the ground. A waterproof membrane covered the push-button control buttons. These buttons tuned the radio (in 10Hz steps), changed the audio volume, accessed memories and other functions.

Output was 1 watt. Total weight with dipole, batteries and carrying case was just under 4 pounds and the Bobcat was 6x9x3 inches in size. Quite a feat for the time in which it was offered.

But the price? At $379, I don't believe too many sold and the Bobcats soon disappeared from the market.

In the area of waterproofing, with O-rings and a membrane-covered keypad, no other HF radio has come close. Of course no outdoor op intends for the elements to get into the radio works but sh stuff happens. If ever there was a time for these features in a new generation of meant-for-the-outdoors QRP rigs, I'd say it's right about now.