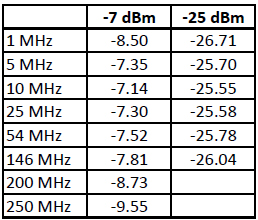 I recently posted a video of how to use the tinySA (as a signal generator), a multimeter and a few attenuators to measure the MDS of a ham or shortwave receiver.

The main requirement for accuracy of such a measurement is accuracy in that of the test equipment being used. With this in mind I decided to see how far the indicated output level of the tinySA, when in signal generator mode, deviated from the actual level at various frequencies.

I chose two power levels to be ouputted from the tinySA: -7 dBm and -25 dBm and used a calibrated HP-436A power meter to measure the actual values.

Accuracy is excellent up to the 2m band. With the exception of 1 MHz, the errors indicated at HF are really no greater than would be seen if I were outputting the Keysight sig-gen into an external power meter and it is quite impressive to see this degree of accuracy with such an inexpensive device that is also a spectrum analyzer.

Above that, the tinySA probably makes for a decent signal generator for a lot of applications, but measuring MDS is not one of them since specific values are being sought.

I'm not sure how to explain the hiccup with the -7 dBm level at 1 MHz. I wish now I'd made other measurements between 1 and 5 MHz, to see exactly where it is that accuracy returns to that more typical of the other HF frequencies.