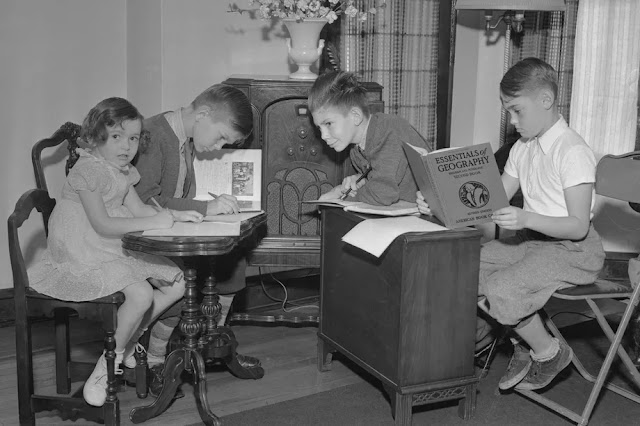 Six to eight decades ago polio was one of the most feared diseases in the US. In 1952 alone, 60,000 children were infected, 3000 died and many more were paralyzed.

The most severe outbreaks were in 1937 and 1946. My father was a victim of the 1946 epidemic, suffering minor paralysis in one leg as a child.

In 1937, many schools around the country closed, as did public pools, movie theaters and parks. But the Chicago public school system took an innovative approach.

During that period, 80% of US households contained a radio. This allowed 325,000 children in grades 3-8 to continue their education at home via radio lessons aired by six Chicago radio stations (WENR, WLS, WIND, WJJD, WCFL, WGN) that donated time for the purpose.

Program schedules for each day were printed in the morning paper. Home with more than one radio & 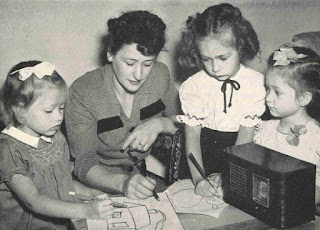 more than one child often set up radios in different rooms so that each child could hear the appropriate grade's lesson.

This continued for one month...until schools reopened in late September of that year.

Curriculum was developed by teachers and monitored over the air by school officials. After each episode, a limited number of teachers were available for phone calls. A large number of the calls were from parents distressed that they could not clearly receive the broadcasts.

Officials knew that the programming would need to be entertaining in order to keep the attention of their young audiences, so guest speakers were incorporated into the lessons, including British explorer Carveth Wells, who conducted a geography lesson.

The second major polio outbreak in the US was in 1942. University of Minnesota radio station KUOM aired, along with Rhyme Time and other curricula, a program called Drawing to Music. You can listen to it here. One third of KUOM's airtime was devoted to "School by Air" during the epidemic. 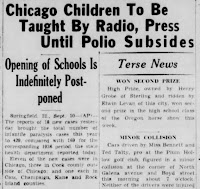 Jonas Salk is credited with creating the polio vaccine in 1955, a huge disservice IMO, to Hilary Koprowski. His escape from Nazi-occupied Poland makes for quite interesting reading.

The US reported its last few cases of polio in 1979, among several isolated Amish communities.