My previous comments alluding to the fact that the ARRL DX Contest doesn't rise to the activity level of CQWW were correct, but just barely. Although the variety of DX was not on CQWW levels, the number of stations on the air seemed to be higher than in recent years. I credit Covid.

This contest was a "sea trials" for my brand-spanking new IC-705 and I'll cut to the chase - it's a keeper!

I'd only received the rig a week prior to the contest but, due to weather, wasn't able to use it until just before the contest. A lot of learning took place over the course of the weekend.

One of the first things I did was change the default values for the rig's filter bandwidths. I did this several times and at one point it occurred to me that I can just leave the filter dialog screen open and change the width of the selected filter as needed. This way, I don't have to limit myself to the three options offered by FL1, FL2 and FL3 selections. Instead, I could adjust as needed, given band conditions and QRM presence and do so with much more resolution than that offered by three selections.

Here's a video that describes it a bit more clearly (I hope):

One of the things I like about the IC-705 is the range of info that can be presented to the op: filter settings/adjustments, memory keyer (see K4SWL's recent video) or one of the "standard screens showing SWR, power out, temperature, etc. And, best of all, the waterfall/spectrum display remain present with any of these other options.

Unlike the last small do-everything rigs I once owned, an FT-857 and FT-891, the IC-705 presents a wealth of info and controls, thanks to the touch screen and intelligently-placed buttons. Nothing I need is buried in a menu and everything I needed during the contest was conveniently accessed, although at first, I might not know how to do it. 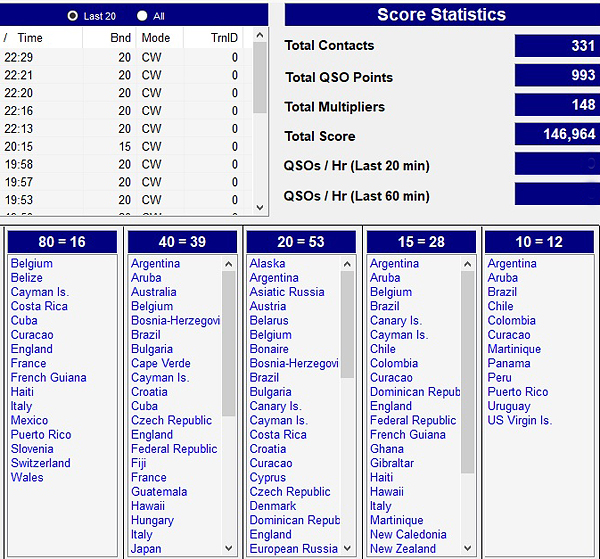 Things like output power, sidetone, pitch, break-in delay/QSK, RIT - they're all only a button-press away.

Back to the bandwidth setting: I used 100 Hz most of the time; sometimes 50 Hz (the minimum) and sometimes wider when looking for activity. One benefit of a very narrow filter, in addition to QRM elimination, is the fact that stations are easier to zero beat since there is "less room to be wrong" about where you place the VFO.

The rig is a joy to use at these settings. They are effective in contest conditions where strong stations are often closely spaced. I don't know what the -6 and -60 dB shape for the bandwidth of these settings looks like but, to the ear, they are incredibly effective and sharp - and that's where it counts. I never once failed to be able to complete an exchange because I was unable to copy (or the receiver de-sensed) by a nearby station.

Out of the box, the radio is configured for the pre-amp to be on for all HF bands. This is not needed below about 18 MHz so I turned it off on those bands. The setting is remembered, by band. But on 10 and 15 meters, the pre-amp is noticeably effective and I did several back-and-forth comparisons on those bands with weak signals to verify this and to see the degree of effectiveness.

I never needed the noise blanker but I did use the Noise Reduction from time to time and it had the effect of reducing background noise level without reducing the amplitude of actual signals to the same degree. The overall effect was a better signal to noise ratio with the most minor of artifacts that did not detract at all from the intelligibility of CW. I left the NR settings at their default values - I'll probably experiment with them in the future.

In addition to my old Yaesu rigs, I couldn't help but to compare the IC-705 to the KX2. Not a fair comparison by any stretch, I know. I would love to hear from someone who owns both a KX3 and an IC-705. They are the same form factor but that, I believe, is where the similarities will end.

After a few pre-contest days of playing with the '705, and a good (for me) amount of participation in a fast-paced CW contest, here's what really stands out to me about this radio:

That it does so many things, with so few compromises. It's a little rig that thinks it's a Big Rig.

Usually, there is no such thing as a free lunch - and I'm sure that's the case here as well. To gain something, you have to give something up. I don't yet know what is given up by the '705 in having incredible performance, a wide range of capabilities, (HF/VHF/UHF, digi-capable without a rat's nest of cabling, no overheating issues, imminently configurable yet easy & intuitive access to functions) front-firing speaker and portability.

The list of things I don't like about the IC-705 contains one item. I wish it would sit, as pictured, without that little screw in the bottom. I do have two other solutions - one has been here all along and the other will be here Thursday. I'll post about them here then (UPDATE: Arriving today).

So how did the rig do in the contest?

The bands were quite good and the activity level was even better. I worked the Belgian Beacon on 15, 20, 40 and 80 meters. That, of course, is Franki OQ5M. I didn't work too many EU stations on 80m  - Franki was the first, on Friday evening; I heard him there Saturday evening as well.

Friday was the better evening for 80m propagation; Saturday evening had significantly more QRN so I stayed mostly on 40m that evening. But I'm not a hard core contester by any means and I called it quits early, with plans to resume the next morning. Old farts need their beauty sleep.

Saturday evening on 40 meters had one of those moments that make radio seem magical, even after all these years. It occurred from 0500Z to about 0600Z. The band was almost finished propagating eastward, toward EU and Africa, and was beginning to open to the Pacific. For that hour, I was hearing stations from five continents on 40 meters. ZL, UA1, LU, FK, EA8, W/VE - all of us in the same room together.

Only Antarctica and Asia were missing from this electromagnetic party, and Asia would be there when I woke up the next morning. Millions around us slept while we, donned in house-clothes and headphones, sent dots and dashes to each other through the cool night air.

Sr. Marconi, Mr. Morse and Herr Hertz (on his birthday, no less!) must surely be smiling.

A rarity these days, 15 meters was wide open to the world, albeit for short periods of time. 10m - just to South America.

In all, me and my new little friend worked 74 DXCC entities, scattered around 22 Zones. By band: