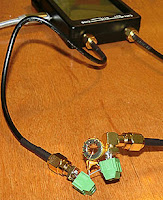 As I pieced together a 6m low-pass filter for my Ultimate 3S this morning I got the idea of using the nVNA to verify what I thought I remembered about LC tank circuits.

It was many moons ago that I learned (while studying for my General ticket, probably) that LC tank circuits offer a high impedance at their resonant frequency when in parallel. Or maybe that was for series tank circuits...?

With the soldering iron already out, I made up a couple of SMA-to-Misc adapters - at least that's what I'm calling them - that will allow me to easily connect a variety of components to the nVNA.

Then I used a toroid and an 82pF cap from the filter kit to make a parallel tank circuit. The 9 turns on

the core produced a theoretical 265nH of inductance. These values should produce a circuit resonant at 34.1 MHz.

With nanoVNASaver set to sweep a wide range around that frequency, I hooked everything up and performed an S21 scan. The result: highest impedance at 31.7 MHz.

A change in capacitance of only 1pF will move resonance more than this amount, as would a change in L from the theoretical or the tiny L and C values of the pigtails used to connect everything.

I didn't really learn anything but it was a fun exercise to see a real-time graphical result of what the values specify. Theory meets reality before my very eyes - always fulfilling.

And now back to my KPA-500 amplifier powered-by-a-Sterling-engine project..... 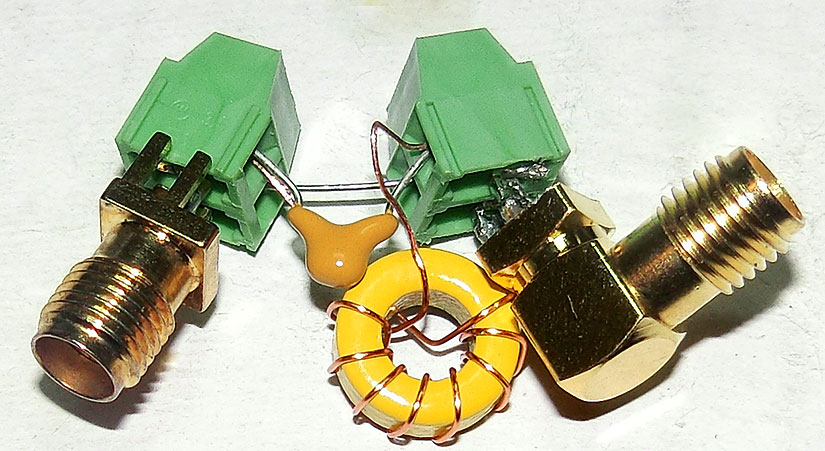 I wanted a jig to be able to sweep the LPFs in my U3S on my Rigol SA with TG. There was an interesting PCB layout floating around that allows plugging an LPF into a little PCB with SMA connectors on each end, but I never got around to getting a board done. Trying flea clips gave the expected SWAG results. I may tinker with your idea, if I can get the legs on the LPF headers into those terminal headers. I've got a small bag of SMA PCB connectors, so I can 'burn' some doing some experimenting. Thanks for the ideas!

Dave, I built a jig just for those U3S filters with some perf board, a sacrificial SMA cable and extra headers from another G0UPL kit:
http://ae5x.blogspot.com/2019/10/some-surprising-results-with-lp-filters.html

It works great and the results seem pretty consistent.
73 - John

John, I do something similar. Take a concept and breadboard the circuit, do a spice simulation and compare results. Naje some changes and see what happens. Sometimes you learn sometimes it's just for fun. A good way to learn how to use LTSpice by the way.

Hello Peter - I've been seeing more references to LTSpice lately (via one of the QRP io.groups). I may dabble with it eventually...all this extra time so many of us now have should be put to good use, right! SimSmith has my attention for the moment though and I'm playing with a design for an end-fed antenna there to see how it plays out when I put the actual one over a tree branch. We have the perfect hobby for combining learning and fun.