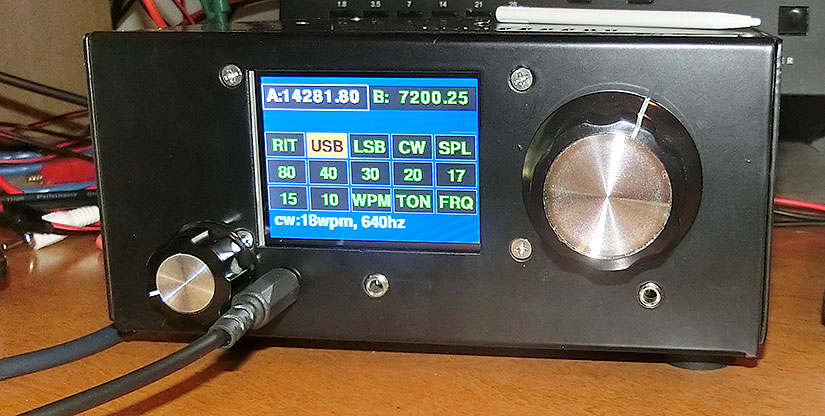 For sale - $160 (or best reasonable offer), assembled, aligned, with case & mic, includes shipping - US only please. The only "mod" I've made is that I slightly enlarged the opening for the mic element in its plastic housing. This seems to have improved reports of received audio.

Note: the website requires the use of Chrome browser in order to see the graph that is necessary for the BFO calibration.

Before the calibration, it was difficult to tune stations as they often appeared to be on the wrong sideband. Afterwards, the radio operated as expected.

There is nothing in the assembly or set-up instructions on performing this calibration. That, and the fact that so many builders (myself included) are reporting missing parts - and extra parts in some cases - gives me the impression of poor implementation of this kit's introduction.

Its performance on CW adds to that impression - first characters are not transmitted. In fact, the rig does not even switch from receive to transmit until several Morse characters have been sent. Compensating for this, I sent several V's, then initiated a CQ which was spotted by several stations on the Reverse Beacon Network.

Fortunately, no one answered my CQ - a CW QSO with the necessity of sending jibberish before beginning with the actual content of the QSO would be comical at best and make one sound like a lid on the air.

My first SSB QSO was moments ago with special event station W2T in Trenton NJ.

Receive audio sounds great. Transmitted audio was reported as less than good, which is to be expected in a radio of this price - I think of it as "room for tinkering".

I am not that charitable for the earlier criticisms such as the CW keying, missing parts (which were minor hardware parts) or poor documentation. These are fair criticisms regardless of the rig's low price.

I think the uBITX fills a gap in ham radio not met elsewhere - it is a 10-80m transceiver that, without experimenting and modding, is functional. At its price of $150 (w/o case) this is an easy rig to dive into in an attempt to improve its performance - something I wouldn't do with a $1000+ rig.

With the rig's price and shortcomings, it provides a great basis for tinkering and the learning that comes with that. But prior to buying one I think people need to know what they're getting:


If you buy one, I recommend that you do it with this in mind.

My buddy Thomas K4SWL is also in the process of building, learning and using a uBITX (v6) and will be reviewing it in an upcoming issue of Radcom. You can read about his results here.
.
.

I lucked into the setup by holding the encoder down while booting. Don't ask me how I thought of it, because frankly, I don't know. Just a WAG. I also found the keying to be annoying the same way. Seems the firmware needs some polish. The shipped firmware won't let you go into 17M by touching the screen, but you can at least go there by entering the frequency on the frequency screen. There are other issues, so expect some updates to be released. Ashar claims that his code was checked about 20% when released, so you can guess how many other bugs will be found.

It's a far cry from Hans and his meticulously written manuals...

I am (still!) looking forward to the QSX! BTW, there is already a new version of firmware (written by Reed (not sure of his callsign). Here is the thread:

Disappointing. Hope they get the CW keying figured out soon.

How much does the rig weigh? Looking to get one of these primarily for portable use.

I wouldn't hold my breath on that. It's not at all a rig for a CW op.

I haven't weighed it but probably not more than 2 pounds, case included.

Here's a question -- were you using the built-in keyer for CW? If so, if you used an external keyer and ran the V6 in hand key mode would it transmit CW properly? Thanks.

"Found the problem with the transmit with trailing tone. In memory manager you can set CW DELAY (TX-RX) and it was set to 0. One would assume no delay. Not true, it must use some system default. Changing it to 1 (10ms) shortened the relay hang time to an noticeable amount and the wave form looks ok. 2 Questions:

1) is that a bug or undocumented feature ;-)
2) why would there be tone output while the relay is closed but no keyup?"

Thank you! I'll check that out this weekend.

My Bitx V-6 up and running, made first contact already, want to know if there is/are/could be/ maybe already, a group of Bitx cw operators that are out there that hang around certain freq. time, place, band, etc? Am inquiring about cw only, not other digital poobalala. Run a straight key here, good quality sending, If anyone knows of a group, gathering site, please let me know. WB7NZI. West Coast, Wa. State. ( Been on 40 meters, running about 9.8 Watts cw. If you hear that call, certainly give me a whistle. Bands been not real good of late tho, am listening. Frank.

Hi Frank - there is this group:
https://groups.io/g/BITX20/topics

I haven't heard of a CW group yet but if you post to the IO.group, I'll bet at least a few would be interested. I plan to give the straight key a try and see how keying goes...would be happy to make a ubitx-ubitx sked with you any time after this weekend.

If you read the HFsignal site the boards are supposedly tested, receiver tuned up and transmit output checked. Other thing clearly specified is once you get you stuff you're on your own. You and the user group have to figure out any issues. There's a list of "improvements recommended" that are pretty basic things a transceiver needs... Doesn't sound like a good choice for a first radio. Maybe a good choice to tinker with...

Thanks John. There is a few of us up here in the N. part of the state that just got our v6 perking and adjusted, couple mods coming soon too, but are getting pretty pumped about this little rig. Recommend using cheap CB power mic for SSB, but right now, but am looking forward to more cw work with it.-- Will do on the search group idea. Frank, WB7NZI.

Just received my uBitx V6.1 last night. Unusable on CW. Having read your blog, I already bought and programmed a Teensy 4.0 replacement for the Nano that runs the Raduino (see www.w0eb.com). Once you get the adapter board assembled and the Teensy plugged it, CW seems much better (it's at least useful). Now to run it through its paces.

Well here we are in August and the thing has been on the shelf for 2 months. Finally had a chance to sit down and put it together. Powered up on 8 AA cells and it receives well. I have a couple of power supplies so I will try transmit eventually. I bought it for digital modes, WSPR, PSK etc but finding information on configurations has been the hard part. It connects instantly to Windows 10, sets a com port and that is that. I guess the USB is for programming only.