Yesterday was the day for decorating the house for Christmas - hanging different curtains, putting different knick-knacks on the mantle, etc. All tasks that are extremely gratifying for my wife and granddaughters while I politely excuse myself from such estrogen-influenced activity.

Put another way, I was up early for the drive to Waco TX and MN81. I was in the mood for a road trip and this one was perfect - coffee in hand, zero traffic on the quiet country roads with Knopfler, Dylan and just a dash of the Gypsy Kings serenading me along the way. "Let me feel your love one more time - before I abandon it" - best line ever in a song (Dylan - Abandoned Love).

The good folks at MN81 (known to others as the Waco Mammoth National Monument) have a small grassy field set aside for NPOTA ops and cared not a whit as to what type of antenna I put up or how long I stayed. Upon arriving at the field I noticed one other vehicle with a Hustler antenna on its rear bumper. The occupant was Bob N4CD who has made over 316 activations in the NPOTA event, second only to KB1HQS. At the time, I couldn't quite remember why Bob's callsign was familiar to me but I later learned that Bob has not only worked all counties in the US but he has operated from each of them as well. He is the County Guy! 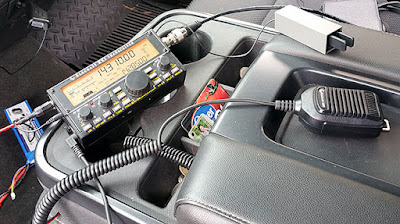 We chatted a bit about band conditions, our set-ups, etc and then Bob left after an hour or so, on his way to another NPOTA site. His new 2016 car has 35,000 miles on it thanks to NPOTA and he was off to add more.

With the CQWW event in full swing on CW, I decided to start out on 20m phone. I raised the telescoping mast to about 17 feet and layed out three elevated ground radials. There was plenty of activity on the band and a good amount of it was other NPOTA operations. Calling CQ didn't do much unless I spotted myself (or someone else did it) to the DX cluster first. Spotting makes all the difference in terms of response and often creates pile-ups. If you chase NPOTA's, do the activators a favor and spot them.


I love this radio. Each time I use it in an event like this, I walk away just amazed at its capabilities and all the functionality built into such a small enclosure. Over the 4-hour duration of the activation, I worked 123 stations on 17, 20, 30 and 40-meter phone and CW, all at ten watts. I transmitted continuously, either working stations or calling CQ and used only 3000 mAH of the battery. The LiPo's voltage never decreased to the point that the KX2's output reduced to 5 watts.

At one point, Bob walked over (we were about 250 feet apart) and told me that I "was doing a number" on his IC-706 despite us being on different bands. His 100 watts was barely registering in my KX2.

This was the first time I've used the KX2's CW memories and voice memory to call CQ, and if not 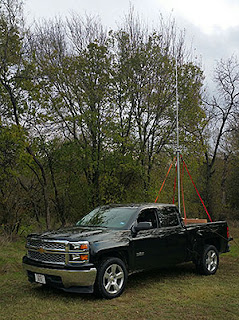 for this capability, I doubt I would have stayed for four hours. At the push of two buttons, the KX2 can call CQ on phone or CW, either once or in a repeating "beacon" mode. I programmed mine to repeat every 8 seconds, during which time I would spot myself or eat a snack, waiting for a caller.


Despite the vertical's size, setting it up took only 10 minutes. QSYing to another band took only a fraction of that and consisted of me loosening a hose clamp and sliding the lower section up or down. It was a bit breezy at times and I brought enough 5/16th line to attach a second set of guys to supplement the straps holding the lower section of the mast upright but, even extended to 33 feet, the mast was absolutely stable, even during the stronger gusts of wind so I never used any additional guy ropes.