With many 18650 cells on the market with various capacities and prices, I didn't want to pay $65 for Elecraft's KBX2 battery and be locked in to 2600 mAH. Other options are available that combine higher capacity and lower prices.

The results of five battery packs are shown. Details of each pack follow below. All include a protection circuit and all fit inside a KX2.

For the tests below, each pack was charged at 1/2C and discharged at 1 amp. Other charge/discharge cycles were graphed at various rates to "exercise the cells" prior to making the graph shown here. Each battery pack was absolutely consistent in the discharge curve it produced when discharged at the same rate multiple times. 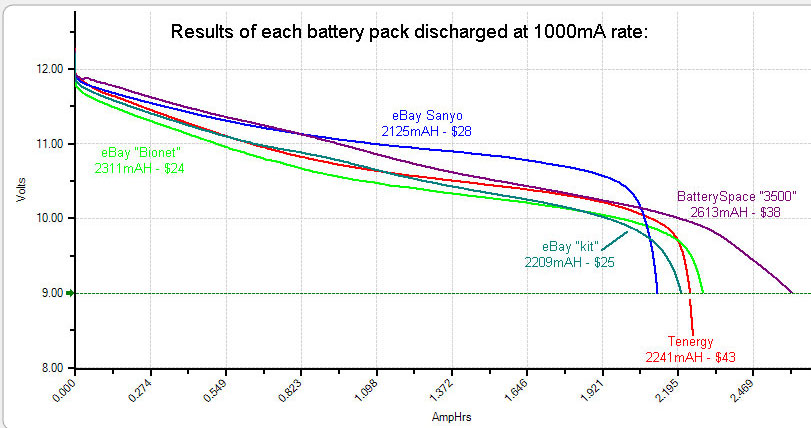 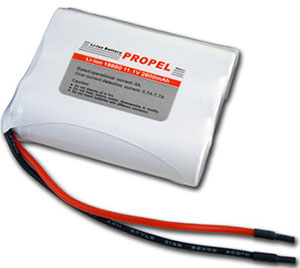 This battery is from the same manufacturer that produces the KBX2 sold by Elecraft but only costs $42 at the time of this posting. In fact, this probably is the Elecraft battery without the Elecraft name on it.

A small circuit board lives beneath the shrink wrap and protects against over-charge and over-discharge. Details of that board are here in case you want to "roll your own" with other cells.

As with all the following batteries, you will have to attach the proper plug (Type M) onto the wires. Also, not that there are no provisions to provide a balanced charge.

This battery is probably the battery-of-choice for those who want what is essentially the Elecraft battery at a 33% discount. Since it is the only "name brand" battery tested here, I consider it the benchmark for all of the following batteries.
.
. 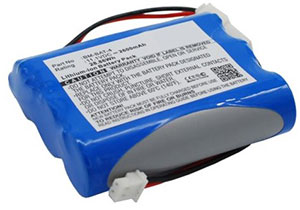 This was the first battery I used internally with my KX2. It is currently $15 although I've seen the price fluctuate quite a bit - I paid $24 for mine.

There is a protective circuit underneath the shrink wrap of this battery as well.

Discharge curves for this battery are, to me at least, impressive. I get 2400 mAH of capacity at a current draw of 100 mA. It would probably meet its advertised capacity at a lower discharge rate.

In the months I've been using this battery in my KX2 its been through roughly 20 charge-discharge cycles (with varying degrees of discharge) and yet all discharge curves taken with my battery analyzer are identical.

This battery offers the most bang for the buck of any I've found. The price would seem to suggest that there's a catch somewhere - despite my efforts at home, during NPOTA activations and on a motorcycle trip, I've yet to find it.
.
. 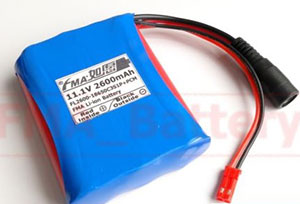 This battery looks similar to the Bionet pack (above) but has a different protection circuit.

The protection circuit lays across the tops of the three cells and adds a few mm to their length. The pack still fits easily into the KX2.

This battery at first seems to be outperformed by the Bionet battery but note from the graph that it provides a higher voltage throughout the duration of discharge.

Also note that there are two connectors exiting the battery pack. Neither of these has anything to do with a balance plug - one is simply for charging, the other for connection to whatever device the battery is powering, presumably something with a mating cylindrical power connector.

In our application with the KX2, we can use either plug (once we attach the correct one) for both charging and attaching to the KX2. I unsoldered the 2nd connector from the protection circuit board and threw it away.
.
. 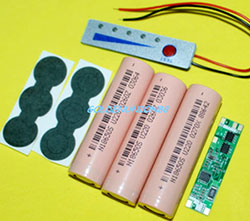 The cheapest of the lot, this pack is offered as a solder-it-yourself kit that includes almost everything (and more) than you need: 3 cells, a protection circuit, a "meter" and fitted end caps for added protection against physical wear. It does not include a plug.

I wasn't expecting much from this battery and didn't take the care and time to put it together in a way that resulted in the most visually appealing way. Once I graphed several discharge curves, I wish I had.

Unlike the following battery, the cells in this one don't have tabs so soldering wires to the ends of each cell is just a bit more difficult and requires more heat. A soldering gun, not iron, is necessary and I cringed at applying that much heat but there seems to have been no damage done based on the comparable performance of this pack.

None of the battery packs tested here provide their advertised capacity. The main reasons for that are 1) that they are new and 2) that I discharged them at a higher rate than will provide maximum capacity. The lower the discharge rate, the more capacity any battery will show.

While testing all these batteries, I discharged them at rates anywhere from 100mA to 1C (2.6 and 3.5 amps) and got a variety of capacity measurements based on the specific rate. I do wish this pack had shown a bit more capacity given its advertised value but it is a significant increase over the others and at no increase in price.

Details on the assembly of this pack can be found here.

New comments are not allowed. 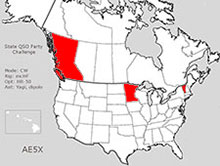