A groundbreaking new radio from VU2ESE 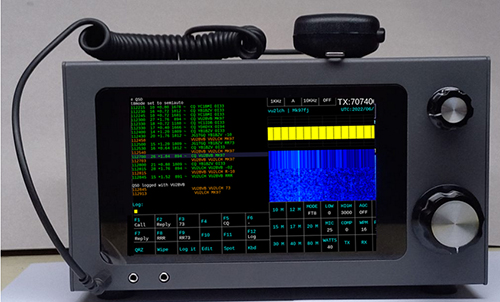 I've been following the progress of a very interesting new radio being developed by Ashhar Farhan VU2ESE.

His newest creation, the sBitx, is the first radio to integrate digital modes like FT8 into the radio as part of its native functionality, along with SSB and CW. I believe we will see this digi-mode integration become more and more common in the future, eventually being fully embraced by the Big Manufacturers.

A Raspberry Pi 4 operates the radio and encodes/decodes FT8, PSK31 and RTTY, displaying the text on the built-in 7-inch screen. FT8 operation is selectable as either manual or semi-automatic and stations are worked (or CQ's called) with commands issued via the touch screen or a USB mouse plugged into the radio.

The current offering of the sBitx is being called a Developer's Edition, aimed at "homebrewers and hackers who are comfortable with frequent updates and experimental branches of the software". In other words, a beta version, with a refreshingly honest admission of that fact (Xiegu, take note!).

I must admit to being tempted to join in the festivities.

More about this innovative radio can be read here: