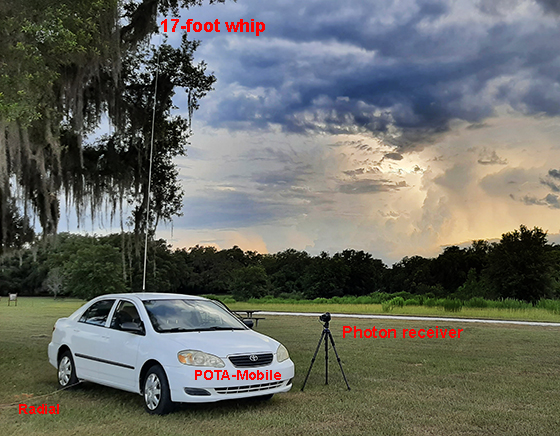 Soon after dinner last night the tropical sky started doing that thing I like - getting photogenic in a major way.

Packing the camera into the POTA-mobile (a gift from a neighbor - more later on that), I threw in another item and hit the road, heading to the pasture that surrounds Lake Panasoffkee.

My goal was to make a time-lapse video comprised of several hundred still images like the one now in the banner.

I also wanted to migrate away from the HamSticks-because-they're-easy mentality and use an antenna I thought might be more efficient.

A few of Scott KN3A's videos on YouTube reminded me that I also have an MFJ-1979 that would be perfect for mobile use. The looks you get with a 17-foot whip mounted on the car (or bike, in Scott's case)!

I set up the camera and got the time-lapse going, then laid out two radials and started calling CQ on 20m CW for a while, then SSB.

California, to Venezuela to France - and many in between went into the log. Six EU entities, 11 entities total - all from a 1h15m POTA activation.

Best of all, an email this morning from 13dka who recorded part of my SSB activity from his QTH in Northern Germany. Thanks Ollie!