5-band QDX now on the air 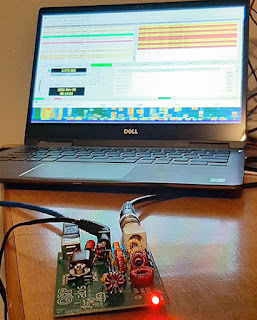 My 22g wire arrived today and I re-wound T1 and fired the little rig up, connected a PC and the antennas - and off we went, exploring the ether.

QSO's were easily had on all 5 bands. Yep, 5. The radio performs very well on 60 meters in addition to the four for which it's advertised.

I adjusted my variable supply for exactly 12.0 volts and made the following measurements:

Ryan W7RLF noted two issues with his QDX, and mine is doing the same:

1) Sometimes when switching bands (via WSJT), the rig initially is neither transmitting or receiving. It seems to go into a dormant state. This is easily fixed by clicking on the TUNE button in WSJT to transmit for a second, then clicking again to go back to receive. Now the QDX will begin receiving and all is well.

2) Sometimes when changing bands or modes (ie, FT8 to WSPR) the rig thinks it's receiving but the waterfall of WSJT contains only hash marks. This is remedied the same way as above.

Neither of these things happen often - they are infrequent and easily fixed.

The receiver is amazing - I'm copying many European stations on 40, 60 and 80 meters, VK and Indonesia on 30 meters.

Hello John, from you previous post I understand that this is purely a digital trx. It is not clear to me if you also need a special WSJT-X version to generate a signal? The problem you have after switching to another band will be a problem when you want to use this trx as a standalone WSPR trx, in which purpose I would be interested. As you know WSJT-X can do bandhopping en this would be a nice and cheap solution instead of using a expensive trx. Not shure if a cycle is transmitted if it has the same effect as turning on the tune button? 73, Bas

Hi Bas - any version of WSJT or JS8 will work. And I'm hoping Hans will fix the issues mentioned in a future firmware update - he is working on an update right now but hasn't said what it will address.

I already fixed both those issues mentioned in firmware 1.01a which you can download from the QDX page http://qrp-labs.com/qdx

Hans, I updated the firmware just before this morning's POTA operation. No issues whatsoever - thanks!