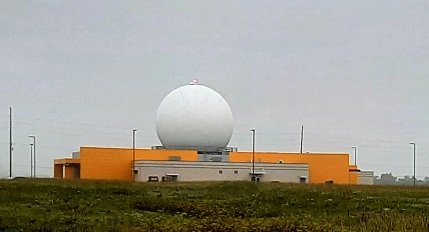 Over the course of a few decades working with various radar systems, I've noticed the same trend we see in ham radio regarding the components and methods used to amplify RF - the movement from tubes to solid state devices.
In our hobby we see the slow wave goodbye of 3-500Z's, 8877's and others as their procurement becomes more and more difficult.
But new solid state devices are announced more frequently than ever before and with better specs than their predecessors from the previous year. A growing number of designers are incorporating these devices into their products.
At work, the story is the same. Radars have funky names for their amplifying devices: amplitrons, traveling wave tubes, klystrons. We consider them "tubes" since, like 3-500Z, et al, they operate with an internal vacuum. But radars using these heavy, power-hungry monsters are giving way to solid state devices as well.
Or, more accurately, the power levels and frequencies for which solid state devices are now available keep going up.
I am currently in Oklahoma City going through curriculum and modification of a long range radar, and witnessing first-hand, the conversion from old to new.
The "old" used a klystron that produced a peak power output of 4 MW and it is being replaced with a solid state design that uses 8 individual RF amplifiers fed into an 8:1 combiner.
The new power out is not the same though - it's 50 KW, but it has the same range and better resolution than the old radar thanks to frequency modulated pulses, pulse compression, the very latest in DSP processing and a bit of magic called "coherent pulse sets".
The end result is a smaller, more efficient, cooler-running and more QRP (a relative term) radar that performs to the same level as its 4 million watt predecessor.
The individual amplifiers weigh about 15 pounds each; we needed a hydraulic hoist to lift the klystron (the lower half of which was immersed in oil) out of the old radar.
Solid state RF devices for high power at microwave frequencies: Coming Soon Here Now.
.
.
Posted by John AE5X John AE5X at 7:54:00 AM