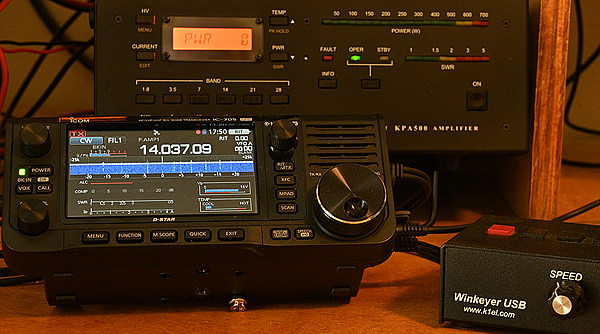 After a week of ice, power outages and unprecedented (for STX) 9F/-13C temperatures the new IC-705 is set up for this weekend's ARRL DX (CW) Contest.

Not nearly as popular as CQWW, this will be my chance to get familiar with the new rig without being overwhelmed by the hurricane of CQWW activity.

The rig arrived a few days ago and I've spent that time oscillating between it, the manual and the group.io for the radio. My first contact was, appropriately, CW and QRP with W1FMR who was operating from a warm, sunny Florida park with a KX2 and a wire thrown into a tree.

After that, a bit of FT8 and some SWL on the 31m and 49m bands, then some 2m repeater-listening. That last part's always fun for 1 or 2 minutes, but I wanted to let the radio roam across the spectrum, so up to 2m FM we went.

So far, I'm quite happy with it. It is as easy to go from CW to FT8, and back again, with no fuss whatsoever. Initial configuration was easy as well, including updating the rig to the latest firmware.

It is absolutely loaded with features and there is much to learn. It's tough not to be impressed with all the performance crammed into such a tiny package ("Paging Michael Scott...").

Numerous stations are on 20m CW at the moment testing their set-ups pre-contest. A few of them into the log and then a CQ from blogger K4SWL, who's activating a park with his IC-705. With Thomas now (finally!) in the log, I deem the IC-705 ready for the ether.