After almost 9 hours of westward travel from Houston we finally turned off the interstate and began the last leg of our trip, now south, toward Big Bend National Park - one of the premiere dark-sky sites in the country.

Finally, another hour, and up ahead in the distance, I saw a shimmering light. My head grew heavy and my sight grew dim - it was time to stop for the night. We'd arrived at our rental cabin in Terlingua, four miles from the western entrance to the park.

We still had two hours of daylight left but my intended target was rising: M42, the Orion Nebula. By nightfall it would be ideally placed for my photographic endeavors...if the clouds will clear.

Clear they did, and the temperature dropped to 35F with a slight wind. The camera/lens had been outside adjusting to ambient for an hour before I began the night's shoot.

This was my first time using the Sky Watcher Star Adventurer but, thanks to helpful YouTube instruction, set-up could not have been easier. The skies here are phenomenal. Pure black with impossibly bright stars by the millions. Aligning the tracker to Polaris was easy but discerning which star was a bit difficult. I'd never seen the North Star surrounded by so many companions.

I finally achieved that task with the help of a green laser held on the star as I sighted it in the finder. A few tweaks of the mount's azimuth and elevation controls brought Polaris to where I needed it to be. I then swung the camera/300mm lens toward Orion's sword - ie, where the nebula lives and set the ISO to 1600.

After few shots to confirm focus and positioning in the camera's frame, I programmed the intervalometer to take a series of 70 one-minute exposures.

I checked the nebula's position on the camera's LCD screen every 15 minutes and was happy to see that it was being tracked perfectly. This verified the accuracy of my polar alignment and the inherent accuracy of the tracker.

I threw out about a dozen of the 1-minute exposures due to wind movement-induced blurriness. The image shown here consists of 58 of those exposures, and old manual focus Nikon 300mm/f4 and a Nikon Z6. I have a lot to learn about processing stacked images and will work on that - a more experienced astrophotographer could make my image look much better but I'm a happy (and cold!) camper.

I'm quite happy with the result and think it makes a good first image for a newbie. As you can see, I did over-expose the central part in order to capture the nebulosity that exists around it. Next time, I'll make two images of Orion and merge them together in Photoshop so that all parts are exposed properly.

A re-edit of the same 58 RAW images, this time using Sequator rather than DSS (which was used in first image) and following along with Peter Zelinka's YouTube tutorial here.

Full resolution version of image below. 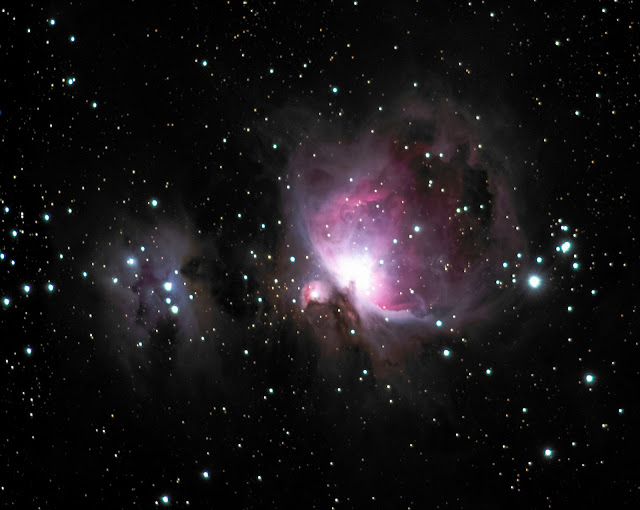