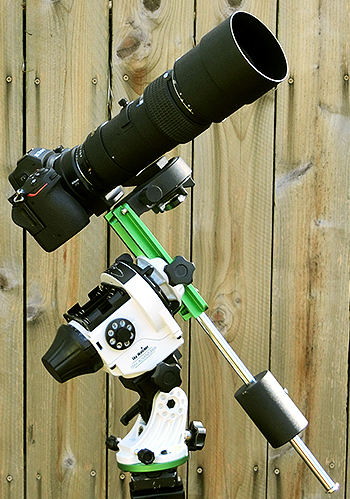 Once upon a time, my interest in AA batteries was due to QRP applications. With the exception of the KX3, most QRPers have moved on to LiPo's or Li-Ion batteries.

But AA's are the most commonly available batteries - they're available anywhere. More importantly for the point of this posting, they're what my clock drive requires.

With nighttime temperatures right at freezing at my upcoming astrophotography location I wanted to test three AA battery chemistries at similar temperatures to get an idea of how long a set of batteries will last.

I know how each battery type performs relative to the others but I wanted the numbers for a specific current draw at my likely ambient temperature.

Sky Watcher's Star Adventurer, the clock drive I'll be using, is powered by four AA batteries and has a payload capacity of 11 lbs (5 kg).

With that amount of weight to rotate, what would you guess the current required by the tracker might be? I was guessing 200...maybe 350 mA.

Surprisingly, only 45 mA is required and, thanks to the counterweight, this did not vary by more than 5 mA throughout the rotational position of the camera/lens.

The batteries I have on hand are lithium, alkaline and NiMH rechargeables. 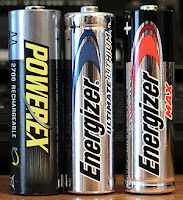 Several Amazon reviews for the lithium cells are very negative with short cell life being mentioned. Any truth to that? Amazon reviews can be much like blog postings - worth what you pay for them ;-)

I set up the analyzer to drain the batteries at a 500 mA rate. The batteries were pre-cooled in my refrigerator at 37F (3C) and left there for the duration of the test.

This is ten times the current that will be required of them and it gives a clear indication of each chemistry's performance.

The NiMH and the alkaline cells surprised me - in different ways for each - with their performance. Now I remember why I don't like alkalines and stopped using them in QRP rigs a number of years ago.

After testing the first alkaline cell I thought there must have been a problem with the test set-up. A second one was tested with identical results. I knew they would perform poorly but I overestimated them still.

Lithiums are the clear winner by far, as I knew they would be.

Here are the results: