Any CW ops from Llanfairpwllgwyngyllgogerychwyrndrobwllllantysiliogogogoch? 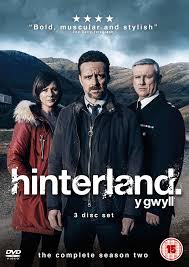 Finishing up a Welsh series on Netflix tonight had me turning to YouTube to check/verify pronunciations of various place names and characters in the series.

Hinterland is a 4-season crime-drama with a first episode that left me uninterested. I decided to suffer through one more episode and was glad I did. By episode three, I was hooked.

Unlike most series' of this genre, each episode of Hinterland is 90 minutes long and it is an interesting - maybe even captivating - series in its own right, but for someone with an interest in etymology, there is that second layer of appeal.

Who would ever have thought that the name "Llew" was pronounced.....well, you'll just have to watch it yourself.

If I ever work anyone from Llanfairpwllgwyngyllgogerychwyrndrobwllllantysiliogogogoch - especially on CW - feel free to just send "Llan" as your QTH.