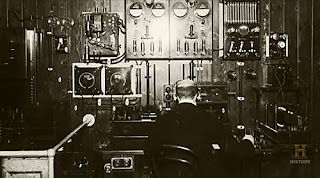 Episode 3 of Season 1 of a British docudrama currently available on Netflix tells the story of Dr. H. H. Crippen.

In 1910, Dr. Crippen murdered his wife and attempted to flee to Canada onboard the SS Montrose. More details can be read on Wikipedia or you can tune into the relevent episode of Murder Maps if Netflix is offering it in your country.

Long story short, the captain of the SS Montrose believes two of his passengers are Crippen and Crippen's mistress, disguised as a boy. He telegraphs his suspicions to the authorities, one of whom boards a faster ship and arrives in Canada ahead of Crippen.

The investigator boards Crippen's ship and introduces himself to Crippen as a Scotland Yard detective.

Crippen's response: "Thank God it's over. The suspense has been too great. I couldn't stand it any longer."

Crippen is returned to England and hanged four months later.

A brief scene in the Netflix episode gives credit to the role played by radio, told by the narrator. CW is heard as photographs of a shipboard station typical of the era are shown.

Although the narrator QRMs the CW audio, I can make out the word "Continental" being sent, so at least it's real CW and not TV-produced gibberish.

You may be able to watch the entire episode here. If so, the discussion of radio's role begins at 30:35.