95 years ago: Two hams assist in a (failed) rescue attempt

On the morning of January 30, 1925, Floyd Collins ventured into Kentucky's Sand Cave. He couldn't have known at the time that he had only 17 days left to live and that his body wouldn't be retrieved until 61 days after his death.

At the time Floyd was 37 years old and an experienced spelunker who'd been caving since he was six. Sand Cave in 1925 was a muddy and narrow tunnel with vertical drops of four to fifteen feet.

In other words, an irresistible adventure for an experienced man like Floyd.

Snakelike, Floyd dug and squirmed his way through various sections including one his brother Homer (and would-be rescuer) would later call "a chimney lined with projecting rocks that tore into your clothing and flesh".

Upon exiting this "chimney" Floyd found himself on a ledge overlooking a huge open space whose floor was 60 feet beneath him. With his kerosene lantern low on fuel, he made plans to come back another time to explore further, then began to exit the cave, sliding on his back and pushing the lantern in front of him.

After only a few feet, the cave pushed back. A rock settled between the tunnel's uppermost part and Floyd's
ankle. It would later be found to weigh only 16 pounds, but it was backed by the small diameter of the cave at that particular point and Floyd was unable to move forward. The rock had settled into place like a tumbler in a padlock and there was no key.

It was not until a bit over 24 hours later that Floyd was reported as missing. Confirmation of him being stuck in the cave came from 17 year old Jewell Estes who crawled into the cave far enough to be able to hear Floyd respond to his calls.

Other men tried to reach Floyd but most returned to the surface terrified of the conditions they encountered as they descended into the mud. “I wouldn’t go back in there for a cold thousand, bad as I need money,” stuttered one rescuer, Ellis Jones.

Homer Collins made it to his brother and was able to feed him coffee and a sandwich.

From Trapped! The Story of Floyd Collins: 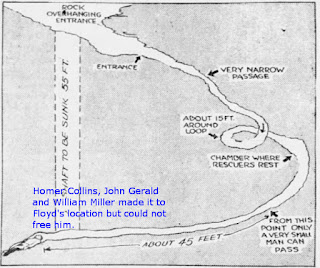 "A problem immediately confronted Homer that frustrated every subsequent rescuer. If a person came into the chute headfirst, he was forced to work upside down and was compelled upon leaving to push himself feet-first up the sharp slant and then backpedal twenty feet more before he could turn around. If he dropped in feet first, as Homer had just done, he could not bring the upper part of his body down to Floyd’s level without contorting himself into almost impossible positions."

Homer stayed with his brother for eight hours, crowbarring rocks in the area, trying to enlarge the opening around Floyd. But new rocks immediately took the place of those removed.

Eventually, the state government took over the rescue attempt, bringing in engineers and equipment. Over the next few days a crowd gathered, numbering, eventually to 10,000 - journalists, food vendors, hawkers and people craving drama. 1200 newspapers around the country were covering the story.

Jeffersonville IN and Chicago IL, respectively, to set up a portable radio station at the request of various state and military authorities to handle communications with the outside world.

Basil 9CHG had been a telegraph operator for the Chicago & Northwestern Railway since 1913 and was called for duty in World War I in September of 1917.

Ogden (I'll use his last name since there is another Homer in this story) 9BRK would later describe the need to get permission from the FCC to operate his radio equipment from the site since, at the time, a station license was specific to a particular (home) location. Permission was granted.

A Crosley 52 receiver was supplied by Sutcliffe Co. of Louisville, a combination radio & sporting goods store. It was manned by Basil in Cave City. The 10-watt transmitter was at the cave entrance, manned by Ogden, with 500-volt "B" batteries donated by Burgess Batteries. A 60-foot wire antenna was strung between trees overhead.

So there was no two-way communications between Ogden and Basil. Ogden reported the status of events to Basil on AM phone, and then Basil telegraphed the news to Western Union operators in Louisville. From there, news went out to the world.

Most of what they were telegraphing were the contents of conversations between Floyd and William Miller, a young reporter who, despite the dangers, managed to crawl down to Floyd with food, water and a notebook. Their conversations were reported verbatim in newspapers across the country thanks to Ogden and Basil. Miller would win the Pulitzer Price in 1926 for his reportage and the conditions under which it took place.

Radio was new at the time but the biggest commercial station, KDKA, was also being kept in the loop via these hams, and broadcasting near real-time news of the disaster to its audience.

Several other men braved the underworld terror in an attempt to aid, or at least comfort, Floyd. One of those was John Gerald, who crawled to within eight feet of Floyd and lowered a line to him. Attached to the line was a lamp that could be modulated by movement. Those movements were detected by Gerald and engineers for several days.

Despite the efforts of many brave men and the best technology 1925 had to offer, Floyd died from
hypothermia and dehydration on about February 14. Rescuers reached his body three days later through a vertical shaft that had been dug in an effort to reach him in time.

With Floyd's leg still unable to be dislodged, it was decided that the cave would become Floyd's grave and a funeral service was conducted at the cave's entrance. Floyd's brother Homer became dissatisfied with this, re-opened the now-sealed vertical shaft and began excavating a new tunnel from it. Floyd's remains were then removed on April 25 and buried on the family farm.